Obrenović’s summerhouse on Plavinac near Smederevo is located on a slope on the right bank of the Danube, with a forest background and a beautiful view of the vineyards, the river and the Banat plain. Conceived as a summer palace for the Obrenović dynasty, it has undergone many changes in almost two centuries of existence. Between 1827 and 1829, Prince Miloš bought a vineyard with an orchard, a meadow and a house “with three hearths for a hammam” from the Turkish sipahis. He quickly built a basement there with a residence for the Obrenović dynasty in the region.

In 1865, Prince Mihajlo had a summer residence (summer house), known as “Salon”, built in these parts, and then in 1897 Queen Natalija and architect Jovan Ilkić rearranged the summer house so that a court residence for King Alexander I was to be built here. At that time, the building had two side avant-corpses with decorative elements inspired by Swiss villas, in “romantic” style. Only postcards and photographs testify to the appearance of that time. After the king and queen were killed in 1903, Queen Natalija gave the villa to Colonel AntonijeOrešković. Antonije’s sons, Borivoje and Milan, significantly improved wine production. In 1909, they installed hail cannons, among the first in Serbia.

During the First World War, the house was severely damaged in the Battle of Smederevo in 1914 between the invading Austro-Hungarian army and Serbian forces. It was later further damaged in frequent German bombings. After the occupation, it was adapted into a military ambulance. The building was almost completely looted in 1918 when the war ended. It is described that only “empty rooms and lime trees 100 years old” remained. The Orešković family kept the villa open to visitors. During World War II, the Germans set up their local command in the building. They took with them some furniture and valuable artifacts.

After the Second World War, the “Royal Vineyard of Smederevo” was taken away from Orešković and became the property of the state under the names “Zlatni breg” (Golden hill) and “Srebrno brdo” (Silver Hillock) and became a palace luxuriously furnished for the needs of protocol. It was used for the first time by the Executive Council, the governing body during the socialist period, specifically the Ministry of the Interior. The President of Yugoslavia Josip Broz Tito visited this place for the first time in 1953. A long-time president, Tito often spent time in the villa with his foreign guests, starting with Ahmed Sukarno in 1956. On the occasion of the first conference of non-aligned countries in Belgrade, the villa underwent a radical reconstruction done between 1957 and 1961 according to the design of the architect Bogdan Bogdanović, and the building then got a neoclassical look.

The castle then narrowly escaped a tragic fate. Namely, at the end of the 50s of the 20th century, there were concerns about the bad configuration of the building and the threat of slipping because it is located on terrain that is prone to landslide. The first idea was to completely demolish the building and build a new, stronger one. This idea was abandoned, and instead architects Bogdan Bogdanović and painters Predrag Milosavljević and Miodrag B. Protić were hired. They inspected the building. They reported that the condition of the building was shameful, describing cracked walls, loose roofs, reed parapets, etc. They also said that there was not a single old, valuable object in the house and suggested that the place be renovated and “brought to its epoch.” The renovation work was done by architect Milan Antić. He completely redesigned the building, giving it the overall classicist look it has today.

All wooden decorations have been removed. The ground floor was reinforced locally with broken brown stones, while the plateau in front of the entrance was paved with granite slabs. The small but monumental entrance with a gable was especially prominent. Above each window there is a metal decoration that completely separated the visual appearance of the front facade and side wings because the lintels of the side windows remained intact. The floor of the large salon is paved with black and white marble in a chekerboard pattern, while the fireplace and the mirror frame are made of white Venčac marble. The interior was arranged by Milosavljević and Protić. Furniture and artifacts for the interior of the villa were bought at auctions across Europe or were bought from old Belgrade families (Rajačić, Drobnjak, Kumanudi, Rakić). Today, the castle contains reproductions of numerous masterpieces of old masters of Serbia and the region.

„Politika” daily states the following, talking about important visitors to the villa: “If we go back to the time of the First World War, the data show that the villa was then turned into a German military hospital, and after the Second World War it became the property of the state. It was used for protocols and was then named “Gold Coast”. It was reconstructed for the first time at the request of Queen Natalija, and the second before the Summit of the Non-Aligned in Belgrade in 1961, according to the project of the architect Bogdan Bogdanović. According to Dr. Snežana Cvetković, senior curator of the Museum in Smederevo, the villa was then designed for the needs of the representation of the Executive Council, which was the official name of the Government in Socialist Yugoslavia.

Tito was delighted with Obrenovićs summer house. It was noted in some photographs that he came to Smederevo on the yacht “Krajina”. For the first time in November 1953, accompanied by Petar Stambolić and Momo Marković, and three years later in Smederevo, it hosted the President of Indonesia, Ahmed Sukharno. The married couple Broz, in 1970, stayed in the villa of Obrenović with Dragoslav Marković, Marko Nikezić, Latinka Perović, and on that occasion he received the charter of an honorary citizen of Smederevo, according to Cvetković. Tito’s last stay in the villa was in 1977, with Jovanka and associates. The reception was solemn, they were given numerous gifts, including barrels of wine and brandy.

The villa, surrounded by a vineyard and a magnificent park, was a gathering place for important people even in the time of Obrenović. The court was the liveliest in the time of the royal couple Aleksandar and Draga. The king also performed state affairs there – held ministerial sessions, signed decrees, appointments… Legend has it that the first official visit to the villa was attended by envoys of Sultan Abdul Hamid, followed by Russian and German envoys Charikov and Baron Wecker Goether, Turkish General Hamid Pasha, and among the visitors was the head of the Russian secret police, Alexander Yosifovich Grabo, who was a mediator between King Alexander and the Russian Emperor Nicholas II. For Prince Mihailo, however, the Smederevo villa was a place to rest with his wife Julija, which was his goal when he built a Swiss-style summer house in 1865. He added two thousand new vines to the king’s vineyard, he regularly came to the grape harvest, but “it was there that he got sick”. At the initiative of Queen Natalija and her son Aleksandar, the architect Jovan Ilikić in 1897 made an adaptation which gave the villa a courtly look. After the May coup in 1903, Queen Natalija gave the summer house and vineyard to officer Antonija Orešković, in whose family she remained until the end of the Second World War. The summer residence of Obrenović was awarded the title of cultural monument in 2009.

During his term in office in April 2011, Serbian President Boris Tadić hosted the Prime Ministers of Croatia and Slovenia, Jadranka Kosor and Borut Pahor. That was the reason for Tadic’s first and last visit to the summer house. ” Aleksandar Vučić stayed in the villa several times. This is explained by his admiration for the policy of the Obrenović dynasty, which he considers to continue, and he hosted the Chinese leader Xi Jinping, as well as Miroslav Cerar, the Prime Minister of Slovenia. He also announced that “if there is an inauguration, it will be in Smederevo, in the house of Miloš Obrenović.” 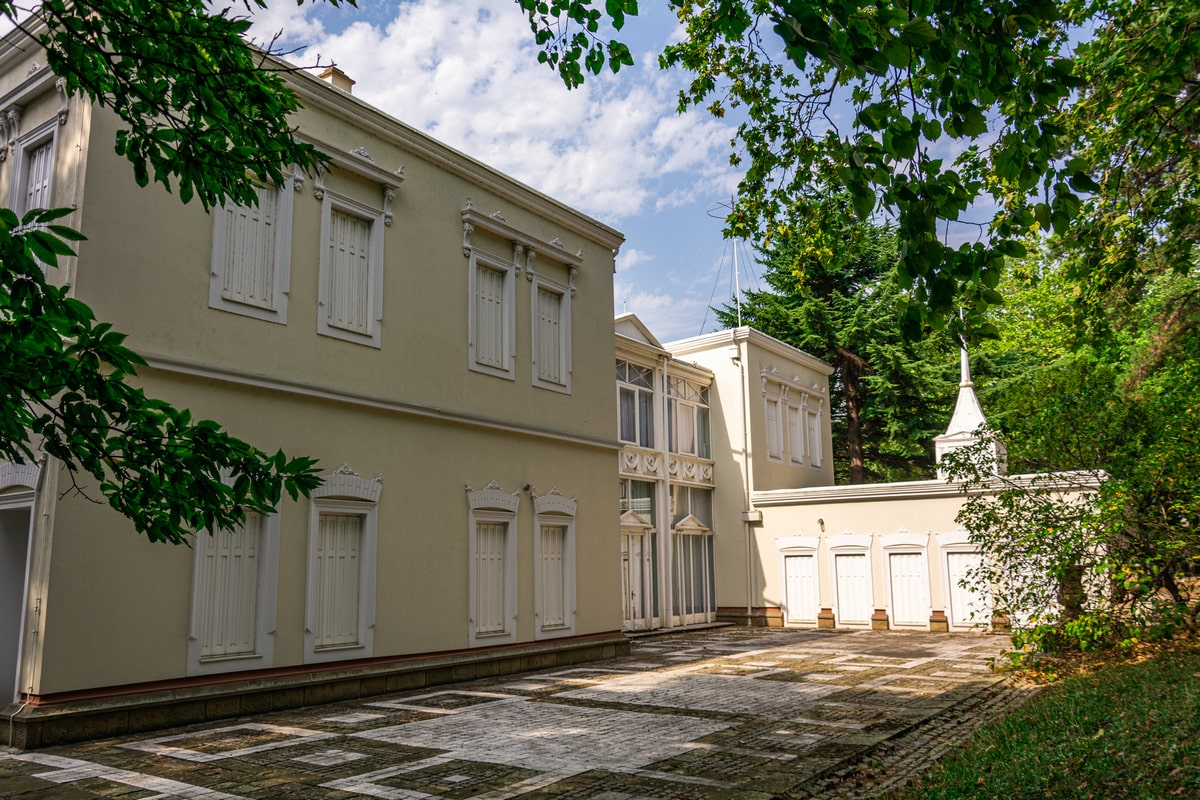 In front of the entrance is a fountain with a bronze sculpture “Leda and Swan”, the work of sculptor Olja Ivanjicki. The park has also been remodelled while a rosarium has been planted behind the building. It was completed in 1961 for the First Summit of Non-Aligned Countries, which was held in Belgrade, as planned. Protić later wrote: “In two years, the fashionable Obrenović residence emerged.” In 1964, an annex was added to the rear of the building to serve as a kitchen. It is a single storey building with 5 French windows with wooden shutters on each longitudinal wall and with a square, polygonal pyramid resembling a spike at the top. Renovation of the foundations of the building and the facade was carried out in 1982. During 1996/97.the furniture has been renovated. Since 1996, the interior has been set up as an exhibition of the Historical Museum of Serbia. The villa contains a summer lounge (glazed veranda), a winter lounge, a green lounge, a dining room, a library and a royal home.

It is the only surviving summerhouse from the Obrenović dynasty. The entry to the villa has been deniedfor civilians for decades, so the residents of Smederevo called it a “forbidden city”. On May 16, 2015, during the Long Night of Museums, it was opened to the public for the first time. Since 2016, it has been open for organized visits with guides, from May to October. During 2016 and 2017, the main entrance staircase was reconstructed and a new facade was built on the entire building. Today, the entire complex – park, vineyards, villas – has been officially declared “a representative building used by state bodies and officials” and journalists describe it as “one of the most representative state-owned”. It is surrounded by 74 hectares of parks and vineyards.