The White Palace (Serbian: Beli Dvor) is the Serbian royal palace located in Belgrade. It is part of the Royal Compound, a complex of royal residences and green areas located in the Dedinje district, one of the most populated parts of the Serbian capital. The Royal Compound covers an area of ​​100 hectares, of which 27 surround the Royal Palace and 12 the White Palace.

The White House was designed in neo-Palladian style by architect Aleksandar Đorđević, probably inspired by 18th-century English villas such as Ditchley Park. Its interiors were decorated by the French house Maison Jansen in the English Georgian style. The furniture is in the Russian style of the 19th century.

During the construction of the Royal Palace, the Yugoslav King Alexander I wanted to build a house for his children, so the White Palace came into existence. After the assassination of King Alexander I in 1934 in Marseille, Queen Mary and the prince’s children, including the young King Peter II, who was 11 years old, stayed at the Royal Palace and the New Palace in downtown Belgrade, which became the family’s official residence. later the seat of the Serbian presidency. The construction of the White Palace continued until 1936, when the works were completed. It then became the residence of Prince Regent Paul of Yugoslavia and his family until King Peter II came of age.

The exterior walls are plastered in white, while the decorations of the windows, cornices and pillars in stone are always white, which is why the building got its name. The main façade has a flat central structure with two protruding side masses. The atrium is preceded by a portico with pillars reminiscent of the Doric style, which support the terrace overlooking the windows on the second floor. There are three entrance doors and they all have glass panes: they are separated by pilasters with capitals of the same style as the pillars. On the second floor, three central windows have a decoration that ends in a triangular moulding, and are flanked by ionic pilasters that support the gable at the top of the facade, above three small windows on the third floor. The windows on the first floor of the two side bodies are three-part: the central one is higher and ends with an arch.

The first floor of the building is raised from the ground floor: to the atrium, behind the pillars there is a staircase, while all around the building the height difference is decorated with hewn stone. The side walls are flat with a slight central protrusion, while the rear façade is completely flat and also has a porch supported by double ionic pillars preceded by a staircase. The three rear access doors are separated by double ionic pilasters. Around the terrace of the building stretches a balustrade with stone pillars; the same decoration is present on the balustrades of the terraces that cover the atriums and on the balconies. The interior has a very large entrance leading to a dining room furnished in the style of Chippendale and to other rooms with furniture in the style of Louis XV and Louis XVI. The entrance overlooks the gallery on the second floor which is reached by a staircase and which is enteredfrom other room. A large window on the ceiling gives light to both floors of the building. 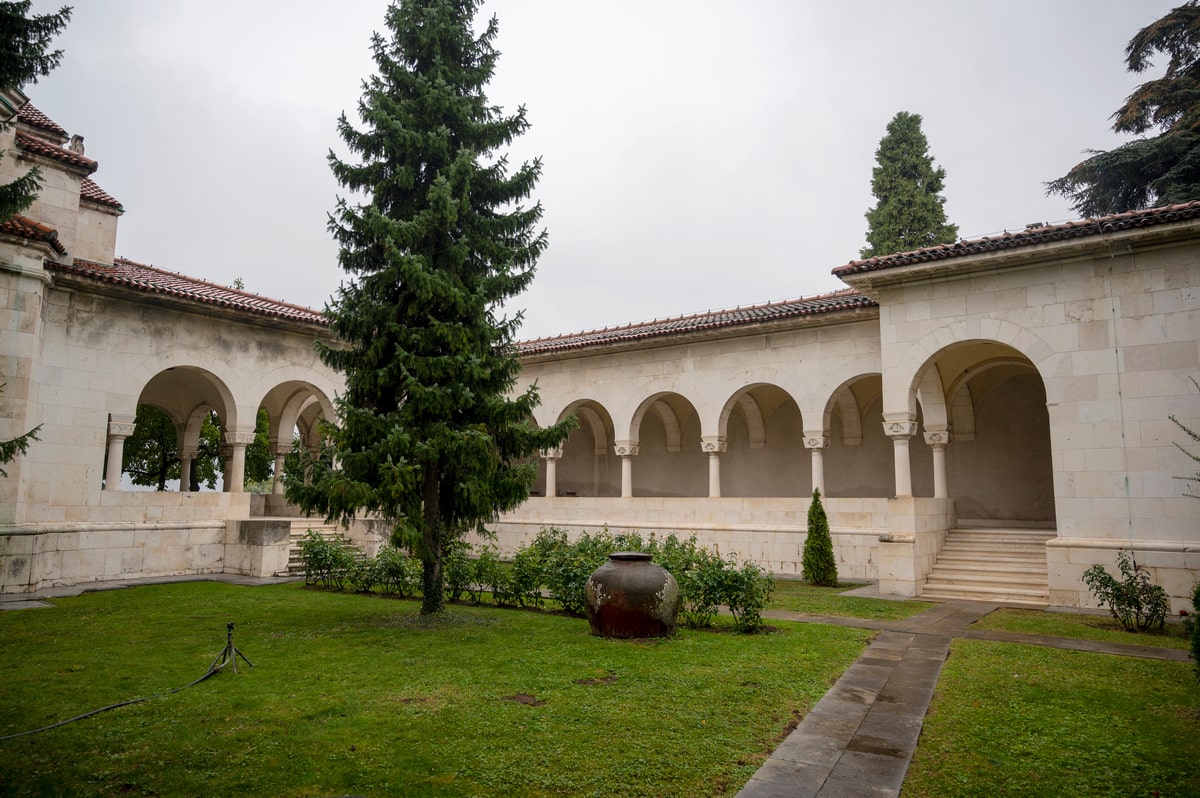 After the Second World War, when the communist government ruled the Socialist Federal Republic of Yugoslavia, the White Palace was used by Tito, and later by Slobodan Milošević. After “Bulldozer Revolution” on October 5, 2000, the royal family, who lived in the United Kingdom, was invited to return to Yugoslavia, which they did in 2001. Prince Alexander Karađorđević, his wife Catherine and the prince’s three children now live in royal compound. The White House is open to the public on weekends between April and November. The palace houses a variety of collections, including paintings by Eugène Fromentin, Simon Vouet, Nicolas Poussin, Sébastien Bourdon, Albrecht Altdorfer, Rembrandt, Paolo Veronese, Antonio Canaletto, Bruegel, Biagio d’Antonio, Giuseppe Crespo, Frany Xaver Winterhalter, Đuro Jakšić, Stevan Todorović, Ivan Meštrović and Vlaho Bukovac.