The New Palace (Serbian: Novi Dvor) was built as a new residence of the Karađorđević dynasty, and it is the last building built in the building complex of the court complex on Terazije, together with the neighbouring palaces of the Old Palace, which is also an architectural and artistic counterpart to the National Assembly. All these edifices form a set of the most important public buildings in Belgrade. It was built according to the original concept of the architect Alexander Bugarski during the eighties of the nineteenth century, as a wing of an ambitious court complex. The palace was built according to the project of the architect Stojan Titelbah (1877—1916) in an academic manner, with elements of Renaissance and Baroque architecture, but the original appearance has changed over time.

According to the idea, the central part of the complex is occupied by the Royal Palace, which was supposed to be built on the site of the Old Residence (former Simić’s building). The left wing would be the Old Palace built in 1884, while the right wing would be the Castle of the Crown Prince built on the site where the castle of the Crown Prince Mihailo Obrenović stood from the seventh decade of the 19th century. Although it is considered a design of Prince Mihailo’s castle, and it was built in the spirit of romanticism by architect Kosta Sreplović, some sources say that he led the final works on the construction of the building, and that the plans were certainly made by Jovan Frenzl and Josif Kasano, the most famous architects of the Building Construction Department. The construction of this building already showed the idea of ​​organizing the space of the complex as a three-part composition. 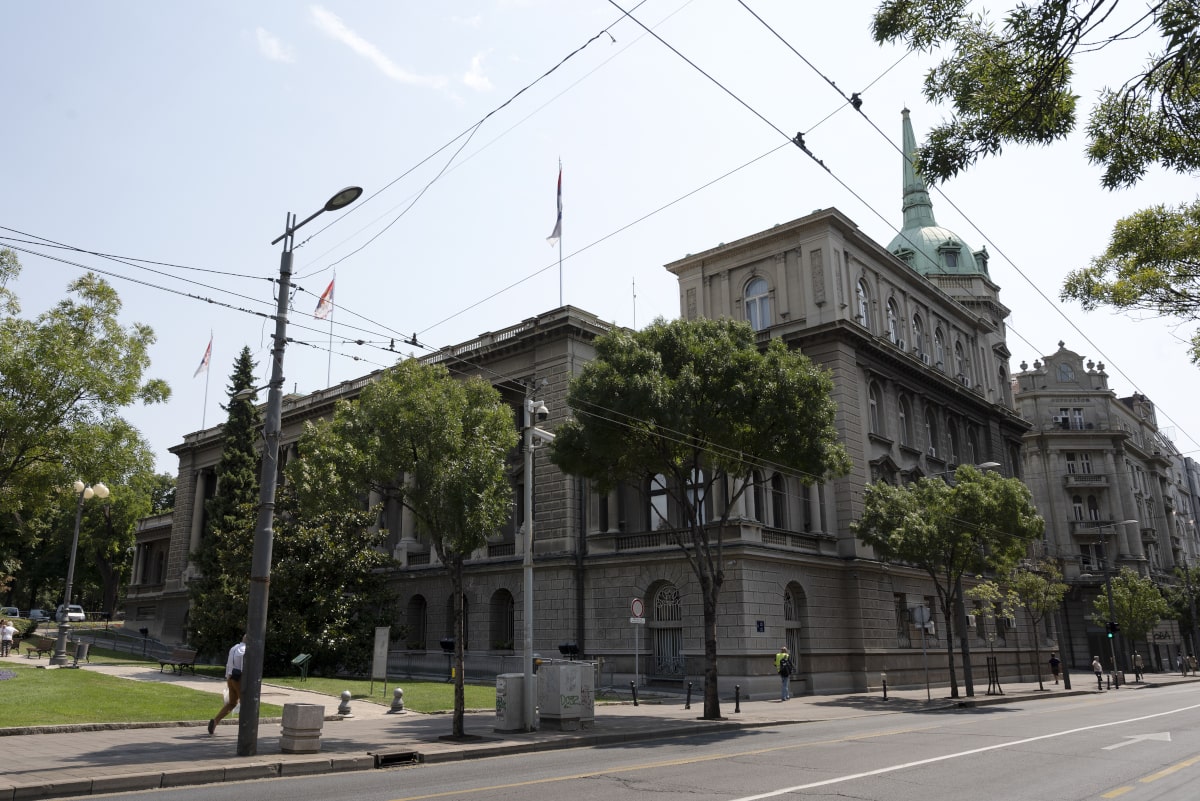 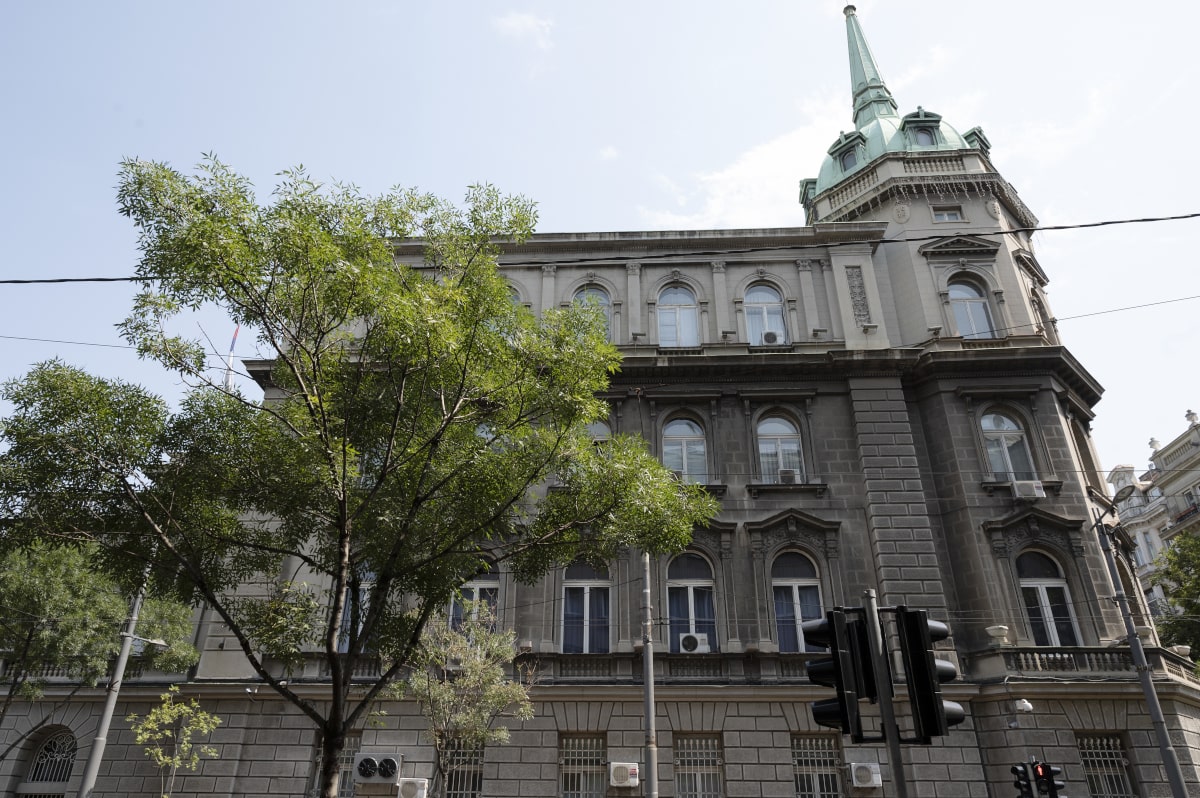 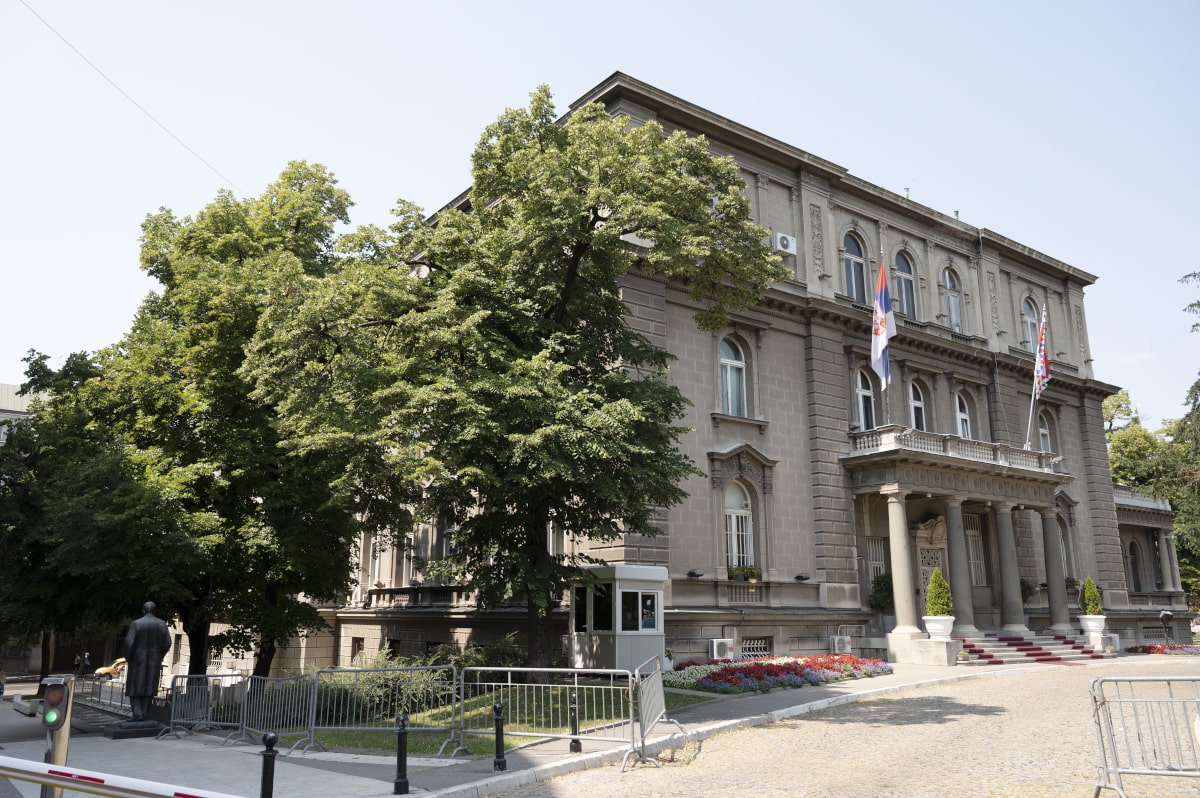 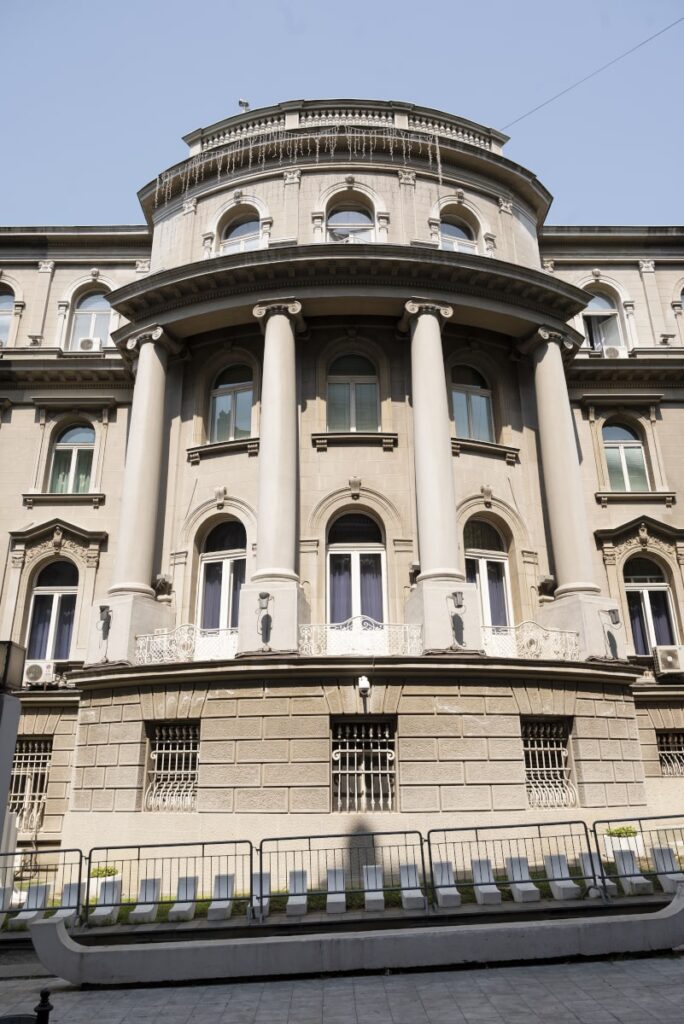 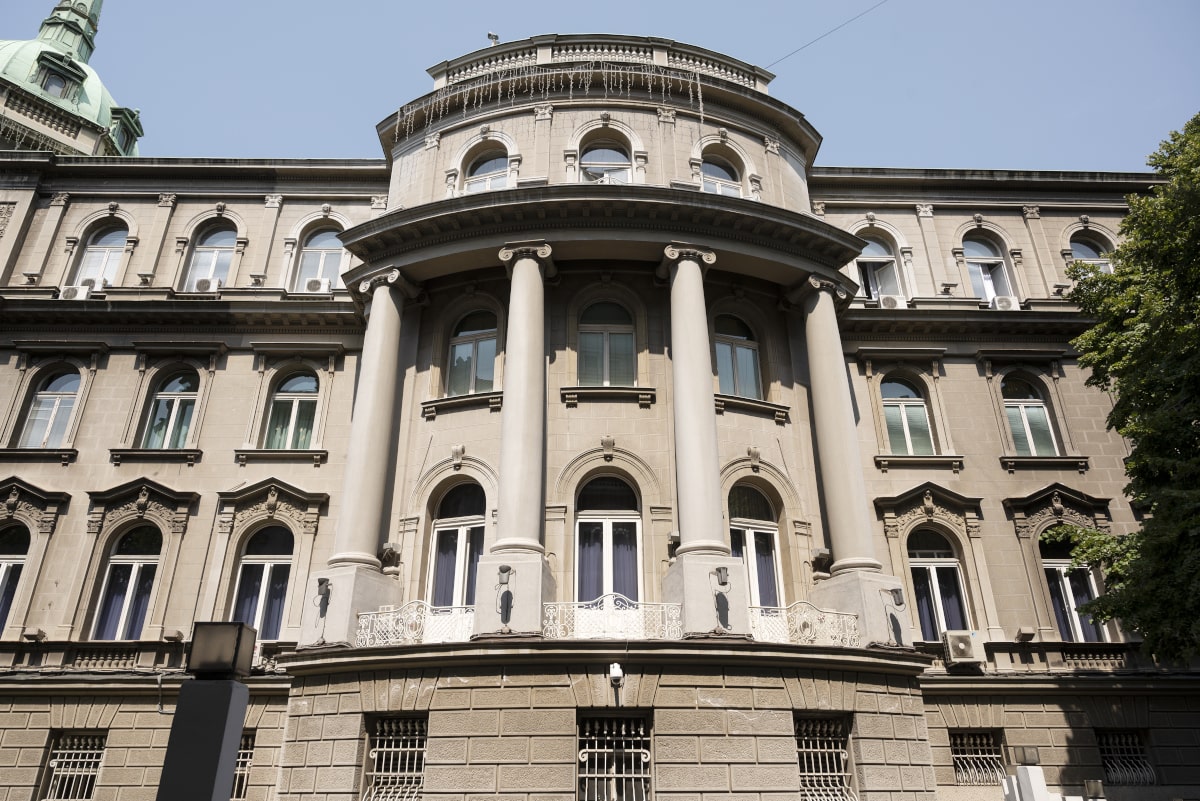 However, Prince Mihailo never lived in this building, but moved to Old Residence (Stari konak). The idea of ​​building the New Palace was initiated after the events in May 1903, and the demolition of the Old Residence the following year. After coming to power, King Peter I stayed in the Old Palace of Obrenović, which in the previous period was not used as an apartment, but for the representative purposes of the king. As the space of the Old Palace was not adequate for the permanent residence of the royal family, there was a need to find a solution for the construction of a new residence. The construction of the New Palace for the crown prince, Aleksandar Karađorđević, began in 1911, according to the project of Stojan Titelbah, a prominent Serbian builder at the beginning of the 20th century.

Today, New Palace is his only known work, which he done as an architect of the Ministry of Construction. The construction of the palace was completed in 1914, but the building was already significantly damaged during the First World War. Fundamental restoration followed in the period between 1919 and 1922. The commission, which took care of the entire layout of the future royal house and the seat of the court marshalate, consisted, among others, of painter Uroš Predić and architects of the Ministry of Construction Petar Popović and Momir Korunović. In June 1922, when King Alexander I and Queen Mary moved into the building, the New Palace became the official royal residence.

The building itself was conceived as a kind of counterpart to the Old Palace. In this way, the need for spatial and symbolic completing of the whole that connotes the very idea of ​​the state is emphasized. The most representative façade faces the garden, and the corner avant-corps is designed in the shape of a tower with a dome similar to the solution applied to the Old Palace building. In this way, the harmony of this complex and symmetry in the silhouette of the whole is established. The central composition is represented by the ground floor and the first floor solved as a single composition, the underground floor is designed rustically, while the second floor is independently treated with a discrete system of dividing the facade surfaces and with less architectural plastic.

The erosion of the main façade was performed with the protrusion of the side and central avant-corpses, in the centre of which the main entrance is positioned, marked by an oval porch. As a result of the function of the building, heraldic symbols get a special place in the decorative motifs of the facade. Inside the central avant-corps was the monumental coat of arms of the royal Karađorđević dynasty. The highest and at the same time the most dominant part of the New Palace – the tower with a dome and the top on top of which was a bronze statue of a double-headed eagle ready to fly is the main architectural element that connects the facades to Kralj Milan and Andrićev venac streets.

In addition to heraldic signs, a particularly important composition is placed at the end of the corner avant-corps, under the dome, two similar, a display of shields placed symmetrically with a cross and four letters “S”, which is part of the coat of arms of the Kingdom of Serbia and later part of the coat of arms of the Kingdom of Yugoslavia. The central motif of the composition of the facade toward the route Andrićev venac is an arched avant-corps above which there was a monumental decorative composition with the coat of arms in the middle. The spatial organization of the Novi Dvor building was determined by a design from 1911 in accordance with the function of the building. There was an assembly room and a dining room on the ground floor, while the part towards Kralj Milan Street was reserved for receiving important guests, while the first and second floors were intended for accommodation of the royal family.

The entire interior design and furnishing of the palace corridor with expensive furniture was done by the French company Beziers. Special attention was paid to the arrangement of the vestibule, the reception hall, the dining room, the Bosnian room, the Japanese and English salons and the chambers intended for the residence of the king and queen. A fence with portals and guard posts was an integral part of the palace complex and connected the old and the new building and separated the palace and the royal garden from Kralj Milan Street. A similar function was given to the guardhouse building, whose facades were upgraded and processed by the architect Momir Korunović in 1919/1920, in order to contribute to the stylistic and urban gathering of the royal palaces. Triumphal-looking portals with decorative plastic in the foreground and heraldic signs, an arched building of guardsmen pillars, as well as gardens arranged in flowerbeds with fountains placed between the palaces gave the whole a representative and solemn aspect.

After the Second World War, the guardhouse was demolished, the fence was removed, while the royal garden was turned into today’s Pioneer Park. In the period 1948-1953, according to the design of the architect Milan Minić, works were carried out on the reconstruction and extension of the New Palace, for the needs of the Presidency of the Government. The building was also enlarged by the construction of a large assembly hall with access to the lobby. The facade facing the Old Palace received a completely new architectural solution underlined by colonnades of Ionic pillars, while the front edges and lines of the original solution were retained towards the Kralj Milan and Andrićev venac streets.

In line with the changes in the Old Palace, a new approach to the New Palace building is being formed on the east side, towards the Pioneer Park, while heraldic representations have been replaced by the emblems of the new government. In interior design, special attention is paid to the expanded element, which is enriched with works by the most famous Yugoslav artists – Toma Rosandić, Petar Lubarda, Milo Milunović, Milica Zorić and others. Thanks to its historical, cultural, social, architectural and urban values, it was declared a cultural monument in 1983.