Castel or Zako Castle is located in Bajša, not far from Bačka Topola, in a fairytale village where Serbs, Hungarians, Slovaks and Ruthenians live harmoniously, which was owned by the Doci family before the Battle of Mohács, and later by the Bot brothers. Unfortunately, the castle, with its dilapidated condition, is a mockery for the village and is in direct contrast to the perfect appearance of the rest of it. The castle was built in the 18th century, for the needs of the noble (probably Tzintzar) family Zako. According to some other records, Zakos are originally from Dalmatia. The whole estate with the castle, the Zako family received as a gift from Empress Maria Theresa in 1751 for merits in military service. Since then, Stevan Zako, the progenitor of this family, once a captain of the Tisa military frontier in Stara Kanjiža, as well as his descendants, carry the nobiliary particle “from Bajša” or “Bajšanski”, as well as the grant of arms. Stevan was at the head of the Bačka militia and married with Julijana, who was the daughter of the famous nobleman Jovan Monasterlija. Zako received an order to populate Bajša. Today, the castle is a cultural asset of great importance, which is not visible on-site.

The castle was originally built as a modest family house before 1759 (when the house passed to Vojnićs) from which the estate was supervised. The castle was renovated in 1818 in the neoclassical style, at the same time as the Orthodox Church of St. Demetrius, with which it was connected by the court gardens. It is interesting that for some 50 years, the castle passed into the hands of the Vojnić family, to settle the debt, but the Zakos retrieved it. It seems that 1818 refers to the year when Stevan’s grandson Dimitrije Zako regained his property. Zakos lost the castle when Stefan Zako Bajšanski died, in 1860, immediately after his father Đorđe, and Nandor Vamošer, a rich man from the vicinity of Sombor, bought the castle. By the way, Zakos lived in Turkish Kanjiža (Novi Kneževac), and they came to the castle only occasionally.

The building, with a rectangular floor plan, has a main façade surmounted by a triangular pillar with small porches that open onto the side facades and a large porch overlooking the park. The rhythm of the windows is uniform, and the building seems simple and clean, but it has been changed by inappropriate adaptation, which has somewhat destroyed the neoclassical stylistic features. The entrance to the building with stairs and side doors is a rather unusual architectural solution. It has accentuated triangular tympanums on the main façade, with uncharacteristic supporting pillars, and the portico faces the park. The gate of the castle is masoned and continues to the wall in the extension of the house. The 1846 changes did not change the appearance much. It has vases as acroterions on the tops of the hipped roof as a decorative ornament.

The castle was partially destroyed in a fire in 2000 and is in very poor condition today. The part where the cinema used to be has completely burned down. The part where there used to be a restaurant with accommodation, is now abandoned and locked. Today, the library is in the third segment, which is still in good condition. At the end of the park, a swimming pool was built, which is used by the residents of Bajša during the summer. It belongs to the so-called “curias” manor houses, which are smaller than castles. 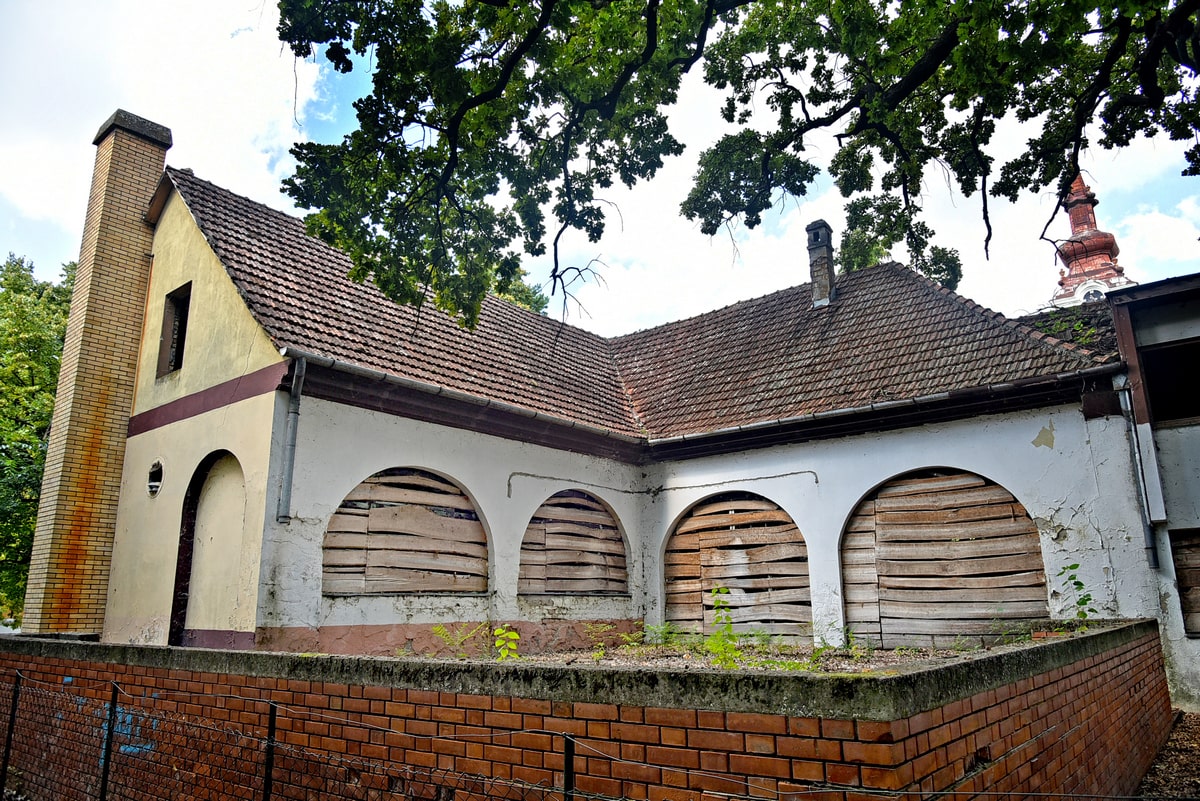 In addition to the royal gifts of the Zako family and objects that belonged to the German count Arpad Falzion, the still magnificent park with over eighty rare plant species testifies to the former splendour of the castle. Between the two world wars, there was a swimming pool and tennis courts within the castle premises. The castle at present is not open to visitors.