Lazar Castle, more known as Castel Ečka, is located in Ečka on the territory of the municipality of Zrenjanin. Puszta Ečka (Ečka Wasteland) was bought at the auction of chamber goods by Luka Lazar (according to some testimonies, originally “Lazarjan”), who was of Armenian origin from Transylvania, in 1781. He founded a settlement in the wasteland and built a church for the inhabitants of the settlement, that is, for the subjects on the estate. The castle was built in the early 19th century in the English style by Luka’s son Agoston Lazar (we can see from his name that the Lazars were stronglyHungarianized at that time). The estate and the castle were bought in 1870 by Count Felix Harnoncourt (Ornonkur or Arnonkur). The new owners then added to the castle and made significant changes, during 1898-99. years. In time, the family received a new surname and nobiliary particles, and full family name was De la Fontagne und von Harnoncour(t)-Unverzagt.

Castle Lazar is a single storey, but impressive building with a complex floor plan, which was later extended by a wing in the shape of the Latin letter L. The main building was adapted so that a residential space was built in the large attic, according to the customs of palaces. In the central part of the extended wing, a tower with a pyramidal roof was built, and in the extension on the ground floor there is an annex with a porch. The porch extends through the entire south wing and is supported by double ionic pillars. The complex of Ečka Castle is surrounded by a small park and once formed a larger ambient whole in which Count Felix Harnoncourt placed a park sculpture, a fountain and other park furniture. The old ancillary facilities are away from the castle and today are located outside the complex. The owner was a well-known thoroughbred horse breeder. Although significantly altered inside and out, the Ečka Castle building is a unique structure. The building represents the stylistic orientation of the former owners who undoubtedly influenced the architecture, and many of these solutions are found in Southern Italy and Sicily.

After renovating and extending the castle, the count organized a ball in honour of his daughter’s birthday, and at the grand opening of the castle on August 29, 1820, the famous Franz Liszt played, and there were the most important figures from the Austrian Monarchy: Count Esterhazy was in the lead (Eszterházy). “Castel” has been a gathering place for many hunting lovers over the years, and the heir presumptive to the Austro-Hungarian throne Franz Ferdinand and the Yugoslav king Aleksandar Karađorđević also stayed there. After the Second World War, the castle was confiscated, and the owners moved abroad. Today, this old edifice has been completely renovated and turned into a hotel. In the vicinity of the castle there is a church, a fish pond and a ruined water tower. All this makes it an impressive destination for tourists on a daily basis, but also for the organization of festivals, such as the Franz Liszt Fest, a festival of classical music, which has been held in the castle for several years. The castle was declared a cultural monument in 2001. It is a great example of putting a castle intouse, and an example of a successful renovation of a collapsed building. It is in excellent condition and is allowed to enter.

There is also a legend about Castel, described by Milan Belegišanin in his “Dreams of Grassy Towers”:

“Many years ago, the travelling company of Jova Čizmić reached the castle in Ečka. As it was already night, the sipahi’s servants placed them in a separate house in the garden to stay overnight. During the next day, next to the small fountain of the castle, the construction of the stage began. The scenery was put in place at dusk the same day. Three of Sipahi’s daughters followed these preparations with interest, and they paid the most attention to the slender, beautiful young man, half naked, who worked like three men. When night fell, the sipahi took his place with his family and entourage, candles were lit on the stage and the show began.It was light and naive piece about a young girl who is pursued by a lot of suitors, but she rejects them all, waiting for her darling to return from the war. In the end, the chosen one of her heart comes, scatters the old and boring suitors and everything ends nicely. Sipahi’s daughters applauded enthusiastically at the end. Despite the naivety of the play, the magic of the theatre took place before their eyes for the first time. Well, still, something confused them. On stage, they recognized almost all the actors who set the scenes during the day, only there was no beautiful young man, and they did not know where this only, beautiful girl in the troupe was hiding until tonight. The actors returnedforfinal bow, and lo and behold – the beauty took off her wig and costume. A handsome young man from the morning was standing in front of the sipahi’s daughters again. Out of excitement, the youngest sister screamed of joy the most. Long after the show, the young girl did not separate from the beautiful actor. Noticing the danger, the old sipahi paid the actors much more than promised and fired them. But the young man did not go with the troupe. For days, the actor hid in the shade of the oaks of a huge park in Ečka. Sipahi did not notice anything, until one evening, when he was awakened by the barking of dogs. He went out on the terrace and saw two young people in the depths of the park. AngryHe unchained the dogs and set them on the young man. The young man began to flee, but only managed to run to the tower, which was located across from the main castle building. There the dogs caught up with him and tore him apart. The girl never married again, she stayed to live in the castle of Ečka until her death. It is interesting that even after the sipahi, whohas built Ečka, the later owners of the castle were foreigners, too. And one more thing: this neo-Gothic castle can never be fully restored. While the main building has been renovated, the tower across from it, which is also part of the castle, is still dilapidated and abandoned. Reconstruction material was brought to its entrance several times and builders from the south were brought. But each time, just before the work began, a growl would be heard from inside. 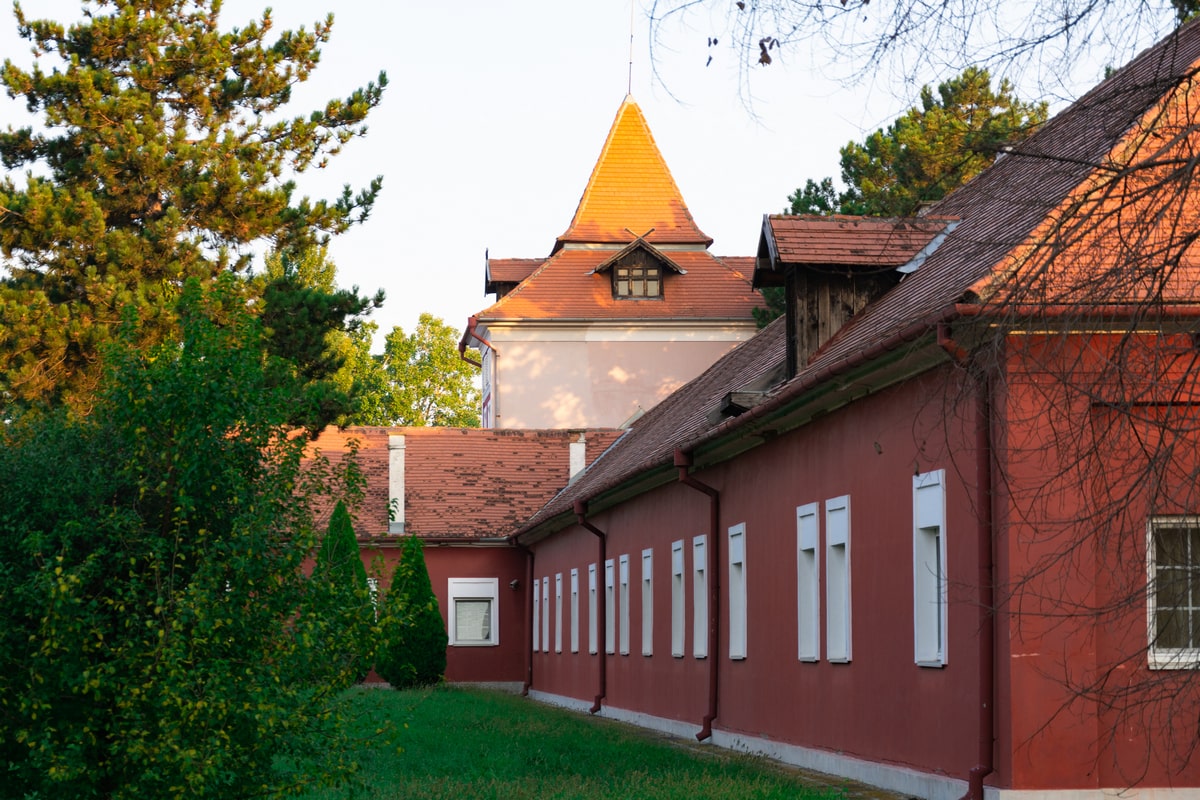 The dogs that tore the young man apart have now become the guardians of his eternal abode. Even today, young couples can be seen in the large park of Ečka, especially in the shady parts. They say that the shade of this park is healing. The girl, left by a young man (leaves her or dies), comes into the shade of a tall trees, hoping to see him. This whole story was written before her death by Sipahi’s youngest daughter. The only thing she did not state in her record was whether she managed to caress the soul of the torn actor in her walks in the park. But there is a partial answer to this question as well. The old women from the village still say that the princess was deathly pale when she returned from a walk through the forest garden, and that her hands would shake uncontrollably. When she managed to calm down after a while, she lit a candle near the fountain where the actors used to mount the stage and scenery. From May to November, Ečka Park is filled with the soothing sound of a fountain and the heavy scents of pine and wax. “