The Patriarchate Court in Sremski Karlovci is one of the most magnificent buildings in all of Serbia. The building of the Patriarchate Court was built between 1892 and 1895, according to the design of the famous architect Vladimir Nikolić, who built many palaces in Novi Sad and its surroundings, on the place where “Pasha’s konak” used to be. “Pasha’s konak” was the first residence of the head of the Serbian church after the transfer of the archbishopric from Peć (Peja) to Karlovci. As the importance of the patriarchate began to exceed the dimensions of Pasha’s konak, it became clear that a more representative building for the Patriarchate had to be built.

In 1817, Metropolitan bishop Stefan Stratimirović set up a fund for fundraising campaign for the construction of the court, which was built during the time of Metropolitan Georgij Branković. The construction of the palace “in the style of Italian palaces” was entrusted to the entrepreneurs Béla Pékló and Karl Lehrer. The court chapel was painted by Uroš Predić. The new patriarchate was built in the Neo-Renaissance style.

However, it is interesting that a competition was announced before that, back in 1878, which was won by a design signed by Gyula Partos and Ödön Lechner, who were architects from Budapest and they advocated the ideas of sezession, which was becoming increasingly popular. Lechner would later become the most famous Hungarian sezessionist architect. It is not known why the winning design was not carried out. It is believed that Nikolić, due to family ties with Patriarch Georgij Branković, overthrew this competition.

The layout of the court is in the shape of the Cyrillic letter “Ш”, and on the central wing there is an entrance with a driveway. Above the entrance, on the first floor there is a court chapel, which is covered with a hemispherical dome with a lantern on top. The main façade has protruding side avant-corpses accentuated at the height of the first floor by pilasters ending in triangular tympana at the height of the attic, and the central avant-corp is accentuated by three larger windows, a terrace and an entrance in front of which is a staircase with side stone sculptures of two lions. On the same façade is a series with seventeen window voids with semicircular ends. The window openings give the main façade rhythm and uniformity, and the shallow pilasters with ionic consoles and balustrades under the window mass give this façade serenity. On the central avant-corp, the roof is emphasized, at the top of which is an observatory.

Around the court is a very nicely formed and maintained garden. A high fence, a combined wall and wrought iron bars, borders the building and a courtyard. There are lonely pillars at the back. The windows on the sidewalls have the characteristics of the national style, with Serbian medieval decorations above the windows, which have four pillars, as in medieval monasteries. Also, there are recognizable rosettes from Serbian architecture. In this way, a perfect and harmonious unity was formed between Central and Western European architecture and the origin of the Serbs, and their old homeland and architecture. Some of the decorations also display the coat of arms of the Serbian Patriarchate, with allegorical bearers in the form of angels, similar to those from the great coat of arms of Hungary. 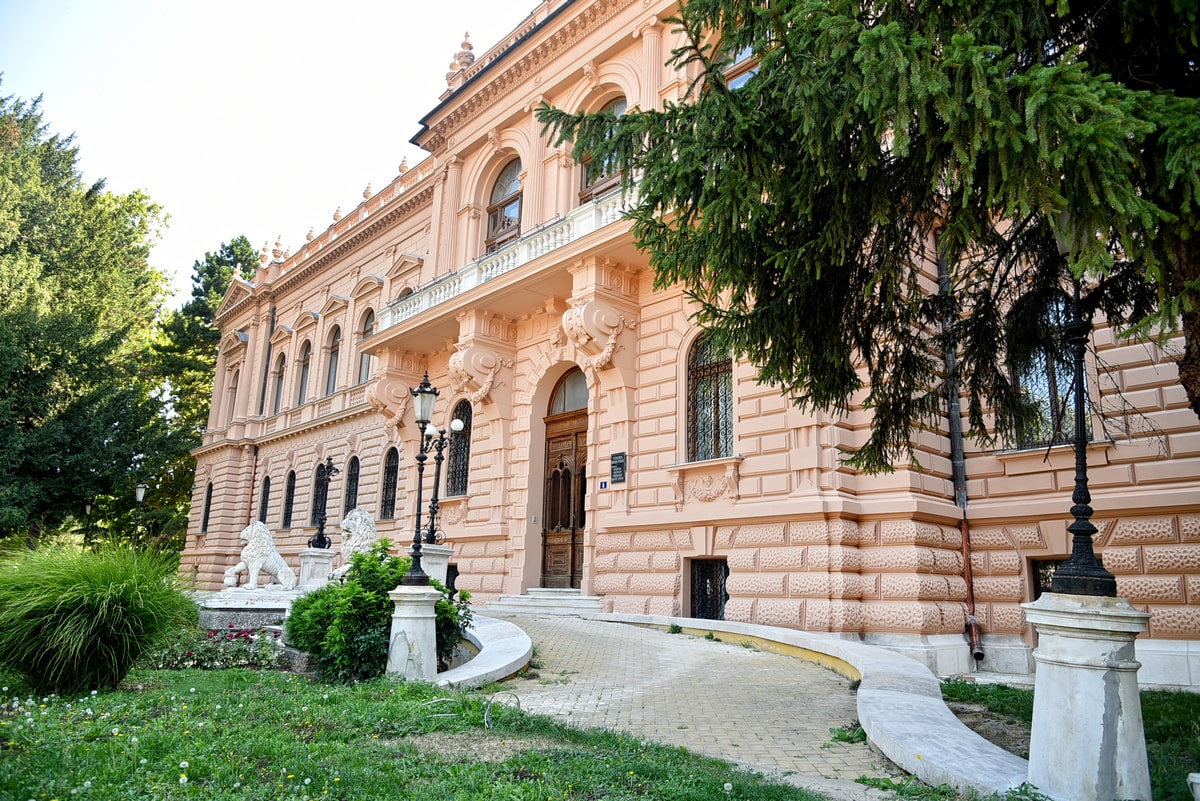 The palace also represents a treasury of valuables, icons, works of art, as well as portraits of metropolitans and church dignitaries, and there are also various objects of applied art and a library of rare and valuable manuscripts and old printed books. Within the court, a treasury was opened to the public with a permanent collection of objects from the 18th and 19th centuries from destroyed and endangered churches in Bosnia and Croatia. The complex is surrounded by a high fence, combined with a wall and wrought iron bars. Today, the Patriarchate Court serves as the permanent residence of the Bishop of Syrmia (the center of the Srem Episcopate), and as the summer residence of the Serbian Patriarch, and the Museum of the Serbian Orthodox Church (until 1930 it was the central residence of the Serbian Patriarch, while the new Patriarchate was not built in Belgrade). The building and the park are being maintained in perfect condition.

The yard is a cultural monument of exceptional importance and entry to it is allowed, under certain conditions.