Villa of the agricultural combine Džervin

The villa of the Džervin agricultural estate in Knjaževac was built in the 1930s, at the intersection that forms the end of Grobljanska Street and the intersection that leads to the cemetery. Despite its somewhat eerie position, the villa is a masterpiece of the architecture of this area and is somewhat reminiscent of the “fantastic castles” that were built several decades ago throughout Europe. According to some data, the villa was built in 1939, just before the Second World War. It was built by the famous Knjaževac and Belgrade cafe owner and hotelier Đorđe – Đoka Cvetković, as a symbol of his power, for almost a million dinars at the time, which was a huge amount. Cvetković owned the famous Belgrade tavern “Kolarac”, and thanks to the agreements with the government, which were very lucrative, he was also a great military supplier. He was also the exclusive representative of “Pilsner Beer” from Czechoslovakia. He was also interested in cinematography and was one of its pioneers.

The villa itself was built on Džervin Hill. The property on which it is located once belonged to Đoka’s father named Tasa, who was a famous merchant from Knjaževac. Đorđe did not accidentally choose the style of the castle from Western Europe, since he himself often went to Plzeňtobargain and stayed in the nearby spa of Karlovy Vary (Karlsbad), and socialized with the financial elite of the then Europe. The villa has a ground floor, two upper floors, as well as a lookout and a tower, and it was still the most modern furnished – it had massive furniture, Czech ceramics in the toilets, tiled stoves, and a decorative wall three meters high as protection from the uninvited. It also had its own water supply, as well as sewage, and a tank with 300 litres of water on top. There was a vineyard around the villa, and the best grape varieties were planted on 85 acres of vineyards.

As early as 1941, Knjaževac came under Bulgarian rule, but Đoka’s property remained intact, unlike his surname, which became Cvetkov. When the Bulgarians withdrew in 1944, Cvetkov became Cvetković again, but the new authorities had not understanding for the rich. Already in 1947, he died without heirs, and his only friend remained Moša Pijade, to whom Đoka sent packages to prison, so that Moša would repay him by the fact that his property and villa were not confiscated in 1945. Pijade even sent medicine to Cvetković during the last years of his illness, when he was forgotten by everyone and lonely.

The chronicler from Knjaževac, Branislav Stojadinović, wrote that “the villa was inherited from Đoka by his servant Milica Dvoržak-Prvulović. The villa was bought from her in 1967 by the agricultural combine “Džervin”. Due to the beauty of the building, it was chosen as the administrative center of the company, which experienced its heyday from 1970 to 1985. In 1990, the villa became a restaurant and hotel, of high class”. However, during the transition, in 2002, Džervin went bankrupt and sold the villa to Jugobanka, which the Serbian government sells, and the already dilapidated villa was bought by the privately held company “Đokić” from Knjaževac.

The administration of this combine, whose “golden age” lasted from 1970 to 1985, was housed in it for years. Five years later, the villa was reconstructed into an attractive catering facility, with a kitchen, restaurant and 14 beds. “Džervin”, however, got into financial trouble, so in 2002 the villa was taken over by Jugobanka. And from Jugobanka, who also came into trouble, already dilapidated, the villa is bought by the private company “Đokić” from Knjaževac. The Tourist Organization of Knjaževac had the idea for the city to buy out the villa, considering that there was a committee initiative from 2007 for the municipality to buy the villa from the company “Đokić” and renovate it, as its most attractive symbol, in the interest of tourism development. That didn’t happen. 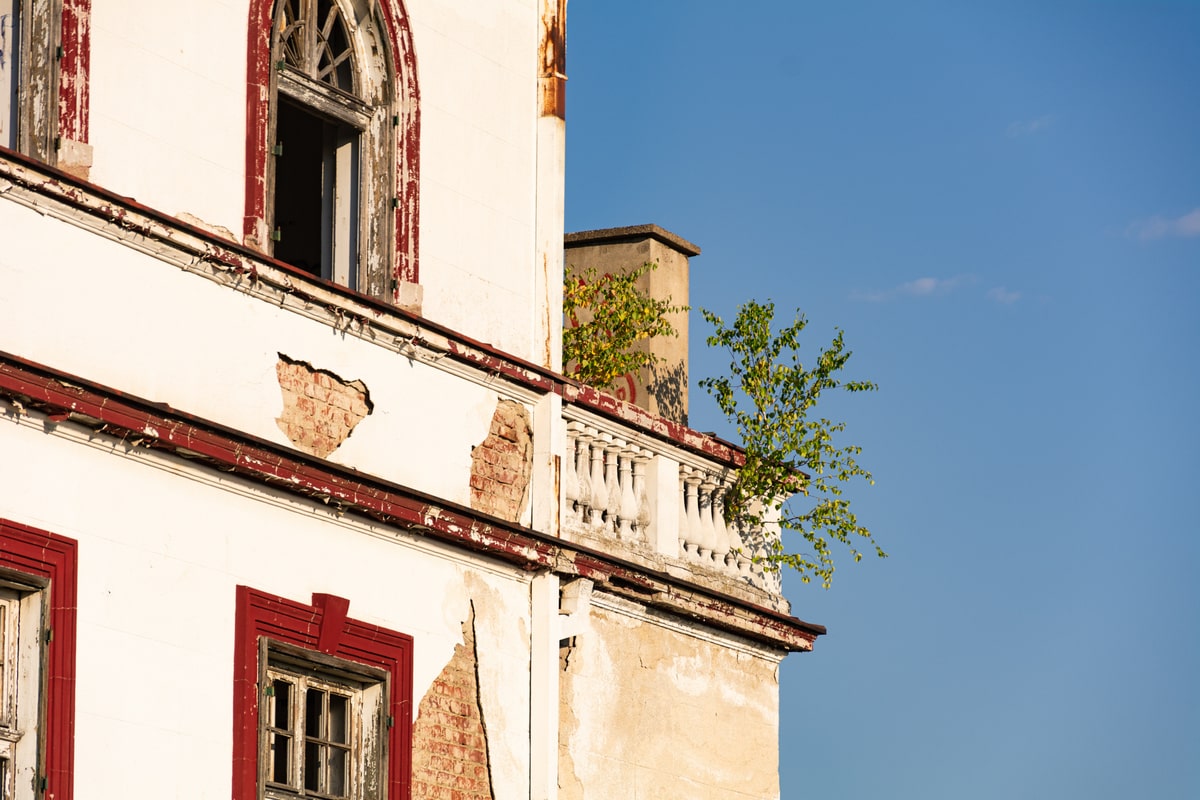 The building is white with burgundy decorations on the facade. On both floors there are porches with balustrades. In many elements the villa has a breath of renaissance. At the top is a crenelated tower in the Romantic style. Until two or three years ago, it was in good condition, until it went under the mortgage. It has been ruined for a short time since then.

Entrance to the building is allowed because it is abandoned and no one is guarding it. It is streaked with graffiti and plants and shrubs have already grown around it that are slowly removing it from view.