Pasha’s Konaks or in the singular, Pasha’s Konak (Turkish for “Residence”), is a building in Vranje which consists of two buildings, hence the plural. They were built in the “golden age” of Ottoman architecture by Rauf-beg Xhinolli, known in our country by the surname Džinić. The powerful Xhinolli family was of Albanian origin and ruled Kosovo for more than a century, but in addition to possessions in Priština and Gnjilane (Gjilan), they also owned property in Skopje and Vranje. The other owner was Dilaver-bey, known as the “Niš citizen and great feudal lord”. After 1878, a large community of Albanians from the newly annexed parts of Serbia moved to Kosovo and were known as “muhajirs” (Albanian: muhaxhir), and the Xhinolli family went with them.

In any case, the konak was built in 1765. Today, the first building houses the National Museum, and it used to be a selamlik for men, and the second (now the SIMPO business center) is a haremlik (seraglio) for Pasha’s women (according to DelfaIvanić). Because unwanted curious male eyes were not allowed to see women, the selamlik building is next to the street, and the haremlik building is behind it, in the yard.

After the liberation of Vranje from the Turks, Islam left the town and the daughter of the last Vranje pasha Hussein-pasha, Abdul-hanum, sold the lodgings to Bishop Paisius, who gave it to the city. Then there was a dynamic overturn in the life of the building, and for a while there was a Gymnasium (1881-1932), and it was attended as a seven-grade one by the writer Borisav Stanković, and his professors were, among others, writers Radoje Domanović and Jaša Prodanović. After that, the building became a municipal office, and Selamlik was converted into the Museum of the People’s Liberation War in 1960, according to the customs of that time. Over time, the museum went from a revolutionary one to a comprehensive one, and it got a department of archaeology supplemented with a numismatic collection and a department of ethnography. The first conservation and restoration works were carried out in 1955, and in 1994 the complete revitalization was completed, the facade and woodwork were brought to perfection and old splendour.

Both buildings were erected in a “bondruk” (post and petrail) construction system with brick infill, and were plastered with mud and painted white, in the classic Balkan style. Unfortunately, these buildings are among the few in Vranje that survived the architectural “reform” of the new Serbian state, and today they represent representative examples of the old urban Balkan house of symmetrical type, with a strongly protruding eaves, similar to the houses we find in Ohrid or Plovdiv. The entrance is adorned with three pillars and four oriental arches. 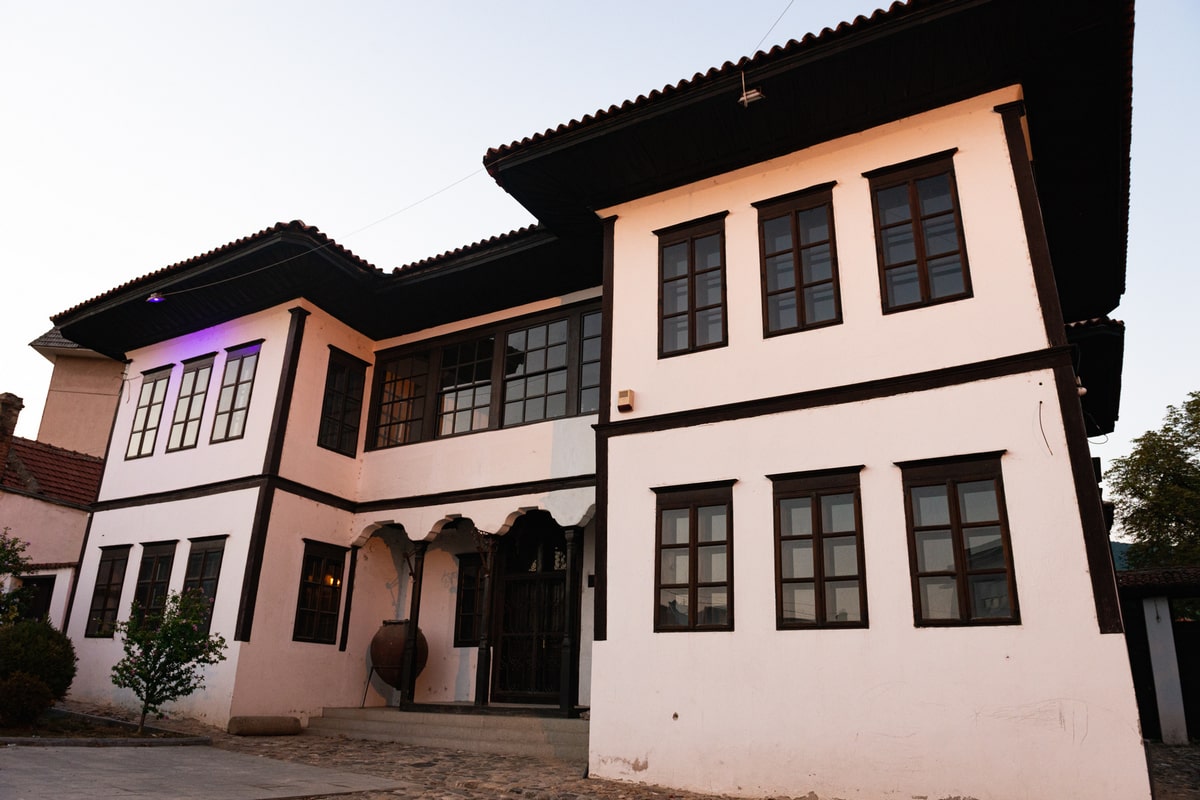 On the ground floor and on the first floor, they have large halls of irregular shapes, connected by straight, very steep stairs, just like the ones from which the Zona Zamfirova descends in the film of the same name. From the halls, you enter the spacious rooms, which are heated by a hearthroom located between them. All rooms have richly decorated wood ceilings, especially the one in the harem building. Although the monument suffered a certain degree of devastation, which is to blame for the results of critical analysis of earlier interventions on it, almost all facade elements and decorative elements in the interior are preserved in authentic geometry, which is a good source of information important for understanding the architectural features of the era this object belongs. We can only think with the melancholy what Vranje and the whole of southern Serbia would look like if more such facilities were preserved.

It is interesting that in Ottoman times, these two buildings were connected by a suspension bridge, which was built so that pasha, when he went to the haremlik to his wives at night, would not have to take a roundabout route through the yard. According to the oriental, and completely Albanian custom, Pasha’s residence was surrounded by a high wall, which survived until after the Second World War, and with it Pasha defended himself from the prying eyes and kept his from the raiyah that walked the streets.