There are few examples of Balkan architecture in Serbia, such as those in Berat (Albania), Plovdiv (Bulgaria) and Ohrid (Northern Macedonia), and other cities that left (at least the formal composition) the Ottoman Empire from 1908 to 1912. so it became almost impossible to make a film of the era like “Zona Zamfirova” in Serbia, except with some resourcefulness. Probably because the Serbs mistakenly perceived this Balkan architecture as Turkish and associated it with slavery under Ottoman rule. But some houses remained.

Such is the House of Shop Đokić, in Leskovac. It was built in the time “before Hadji Zamfir”, an imaginary character of Sremac’s novel, at the beginning of the 19th century. It is so valuable among the new buildings of Leskovac, a city destroyed by the Allied bombing in 1944, that it has the status of a cultural monument in the category of cultural asset of great importance. The Shop-Đokić family lived in it from 1820 to 1956. when a part of the property was confiscated and the house itself was nationalized. The name of the family shows that they were from the Shopluk region, which according to some versions includes Leskovac itself, and according to some, that region is further north and to the east. The Shop-Đokić house is precious because entire generations of this family have lived in it.

In any case, the house itself is a two-storey building in a bondruk (Post and petrail) structural system, with a multi-pitched roof covered with shingles with extended eaves. In its first version, the house had four rooms on the ground floor and five rooms on the first floor. It has all the features of Balkan architecture, and it especially emphasizes the divanhana (conversation room) on the first floor, placed in the middle of the courtyard facade.

The interior of the building is interesting because it has impressive decorations in carved wood on the ceilings, stair railings, parapets and niches, as well as door and window frames. What sets the house apart from the others in a way, are the window shutters, which are made of two parts: the upper part is raised, while the lower part is lowered. In 1979, there was a wrong reconstruction of the western part of the house, when unprofessional work led to a change in the layout of the rooms on the ground floor and first floor. However, regardless of the changes that occurred in the interior of the house, it retained the general features of a town house characteristic of the first half of the 19th century. 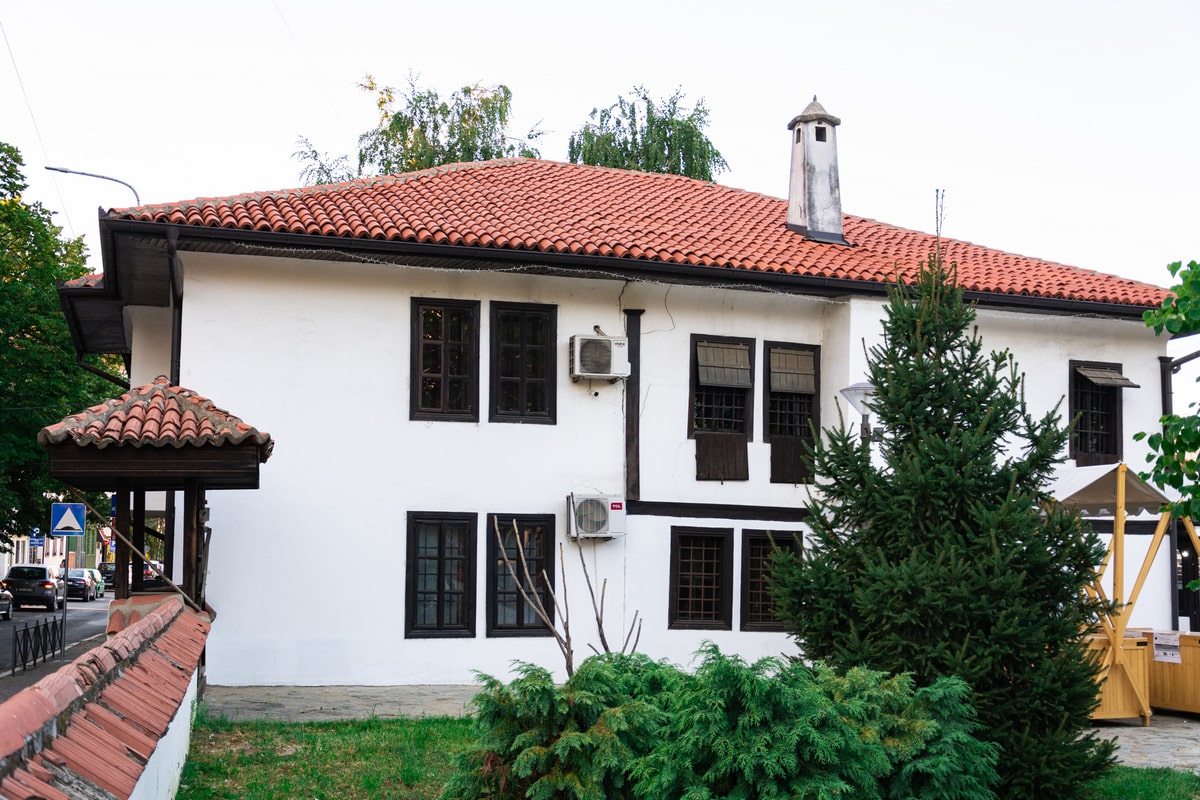 The Shop-Đokić house is so important for the history of Serbs and Serbia, that it is protected. It is interesting that the facade is in a way “reverse” – the courtyard one is more interesting and disjointed than the outside, to the street. This testifies to the strong influence of the confined family life facing the yard, which we find in Turkey, but also in Spain and in the Arab caliphates, where the yard is the central part of the house, and the relation towards street life is weaker, which is manifested in architectural design solutions. The main and most beautiful rooms are located upstairs. The spacious hall is in the middle, and behind the hall you enter the open conversation room, the most prominent and most beautiful part of the house. The most interesting decorative element of the entire building is the ceiling of the divanhana, richly made in woodcarving, of which there are not many preserved in Serbia. It is characteristically white. Today, the house of Shop Đokić is housing the Tourist Organization of the city of Leskovac. The terrace at the front of the house is quite sloping. Beside that, the situation is correct. Parts of the fence wall around the house are damaged. Cultural events are regularly organized on the plateau in front of the house.

The building is in good condition the entrance is allowed.