Bissingen Castle is located in Vlajkovac, a place located by the international road Pancevo-Timisoara, in the municipality of Vršac, just before entering the town of Vršac, at the very threshold of the village, seen from Pancevo. The magnificent building of expressed elegance and beauty was erected in 1859 and represents a cultural monument of great importance. It was built by Count GyörgyMocsonyi on his estate. By marriage, in 1888, Countess Georgina Mocsonyi brought in a dowry the estate and castle to the famous Austro-Hungarian noble family of Bissingen-Nippenburg, which held it in possession until the Second World War, when they were expelled together with other Germans from southern Banat. Then, by the law on nationalization, this magnificent castle was taken away by the Bissingen family. It was built on a property outside the rural and urbanized units and belongs to the type of free-standing buildings. It is strikingly ochre in colour.

The castle was built in the neoclassical style, which was already in downtrend at the time, but was popular in the peripheral parts of the Empire. The castle is a symmetrical building of larger dimensions, with a rectangular base. The façade, facing the park, has a central part of the indented central avant-corps accentuated by a portico, connected by terraces supported by iron pillars, with laterally jutted avant-corpses. On the first floor of the entrance porch, there is a ceremonial hall above which is a roof cornice, an attic with a balustrade and an arched niche in which was the coat of arms of the Bissingen-Nipenburg family. The pyramidal roof is surmounted by a ring, a sliced ​​bulbous finish and a spike on which are stylized a lily, a flag and a lightning rod.

The main facade, which faces the road, is simpler and less representative. It has a shallower portico and a terrace fenced by balusters. Sculptures in symmetrical shell-shaped niches used to stand on the facades. The decorative elements of the interior and exterior are made of wrought and cast iron. The once fenced complex, which was entered from the road through wrought iron gates, contains: a serf house, a family tomb and a chapel of the Bissingen family on the other side of the Danube-Tisa-Danube canal, a designed park (protected as a natural monument in 1973), artificial lake with a fountain and a sculpture in the middle, a stream and bridges. Today, the park is overgrown with shrubs and grass, and it is difficult to walk through it and find everything that once adorned it. 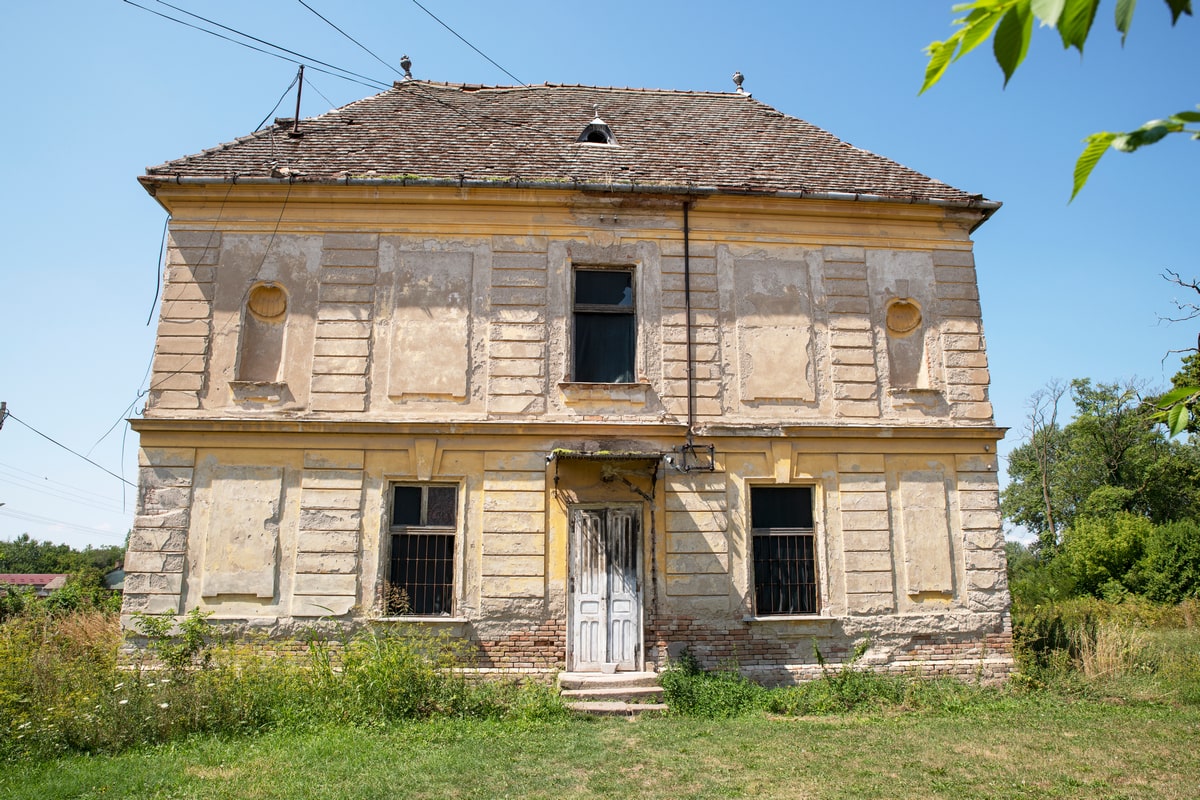 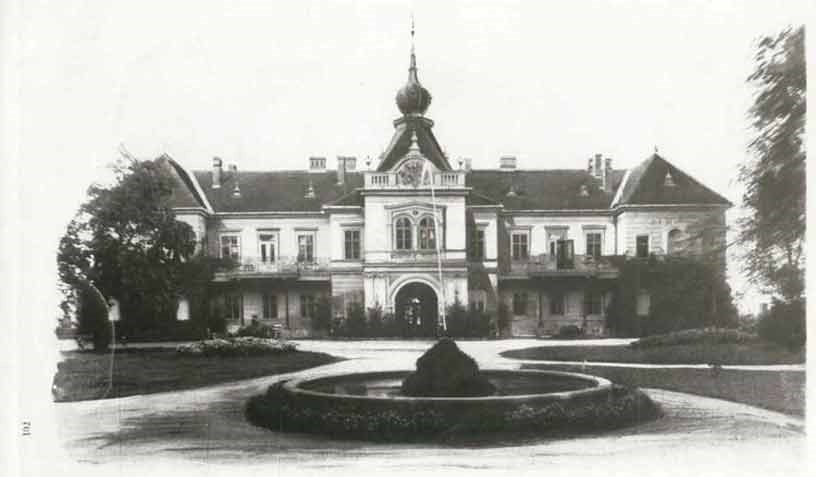 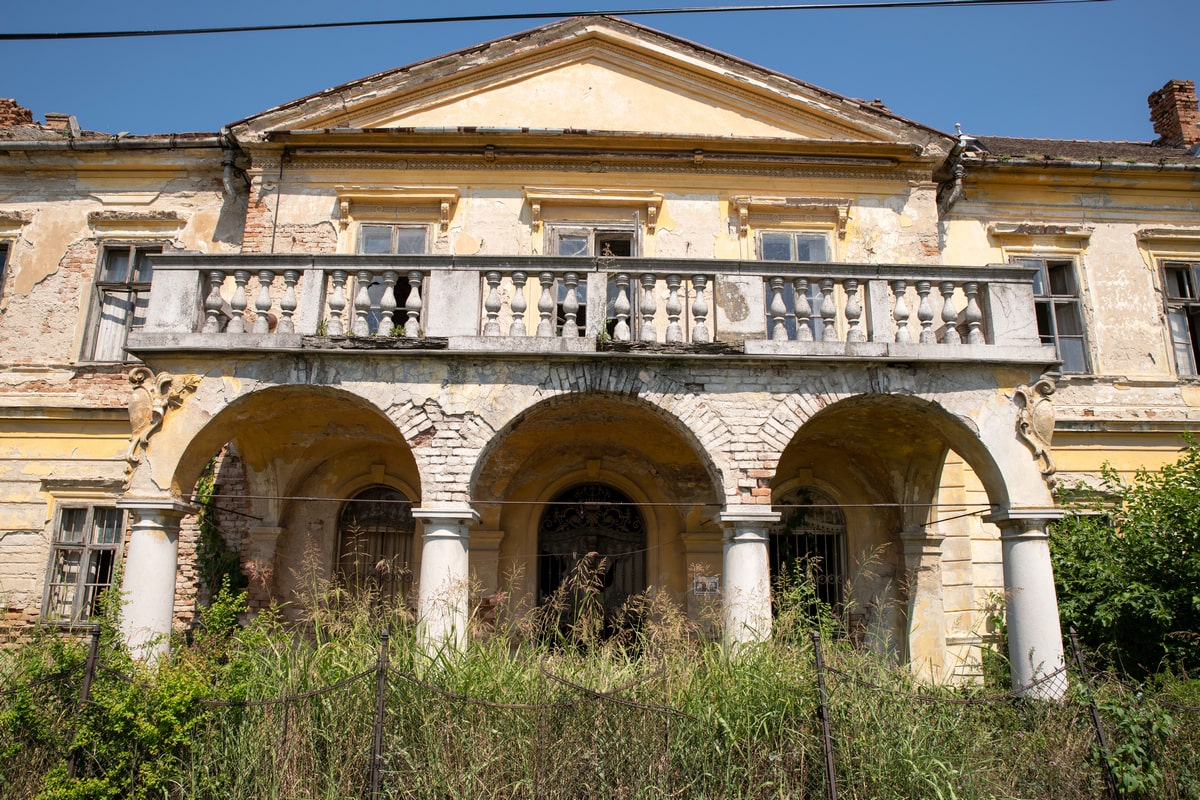 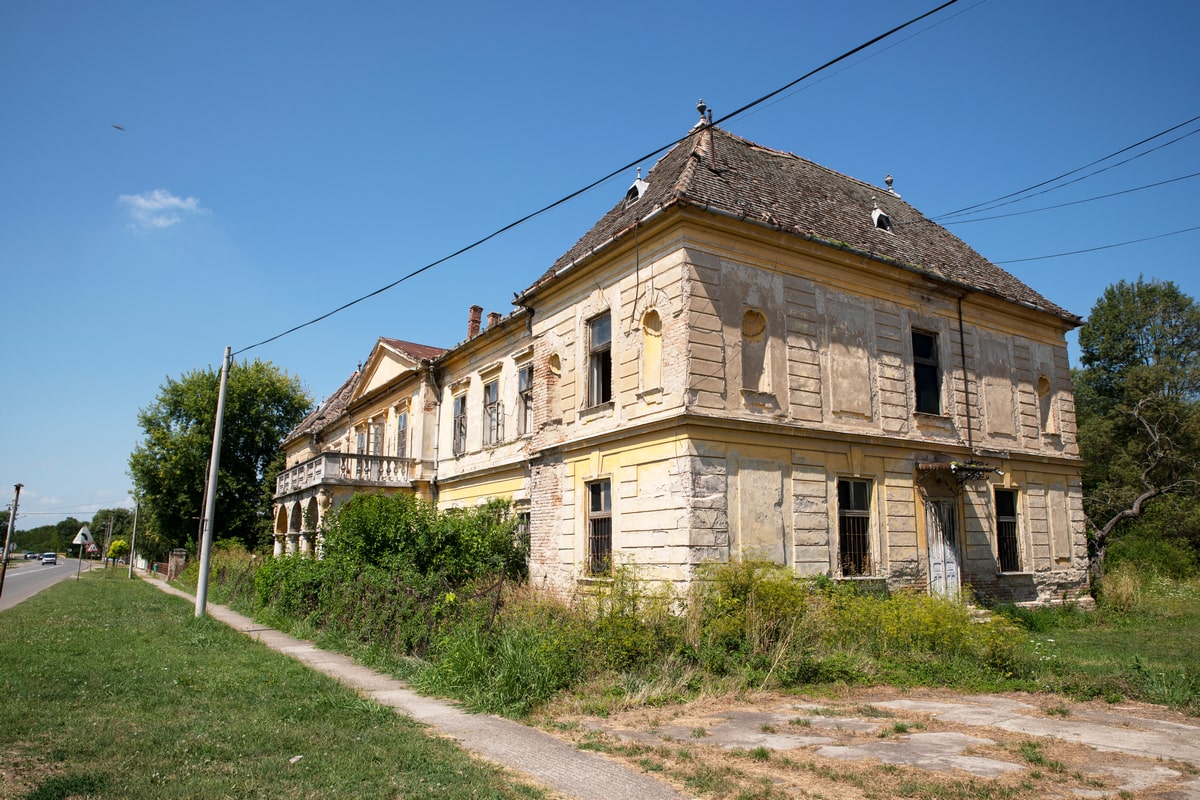 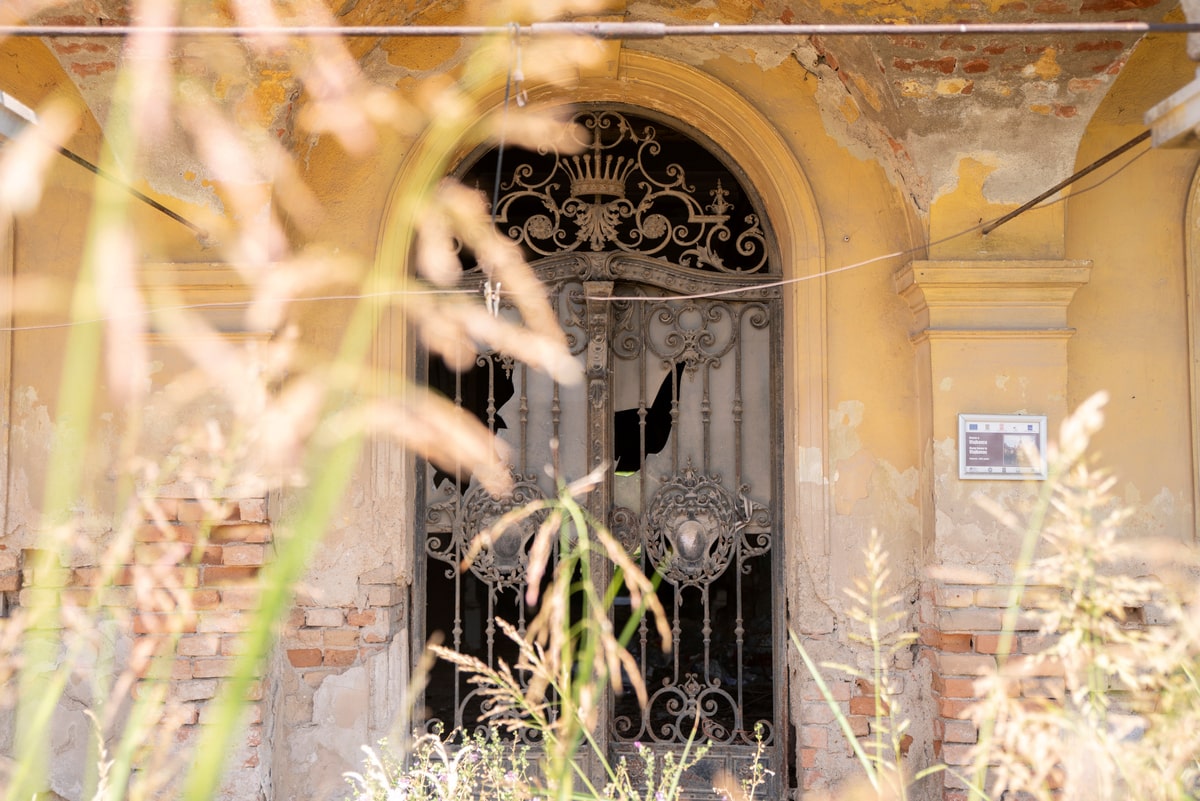 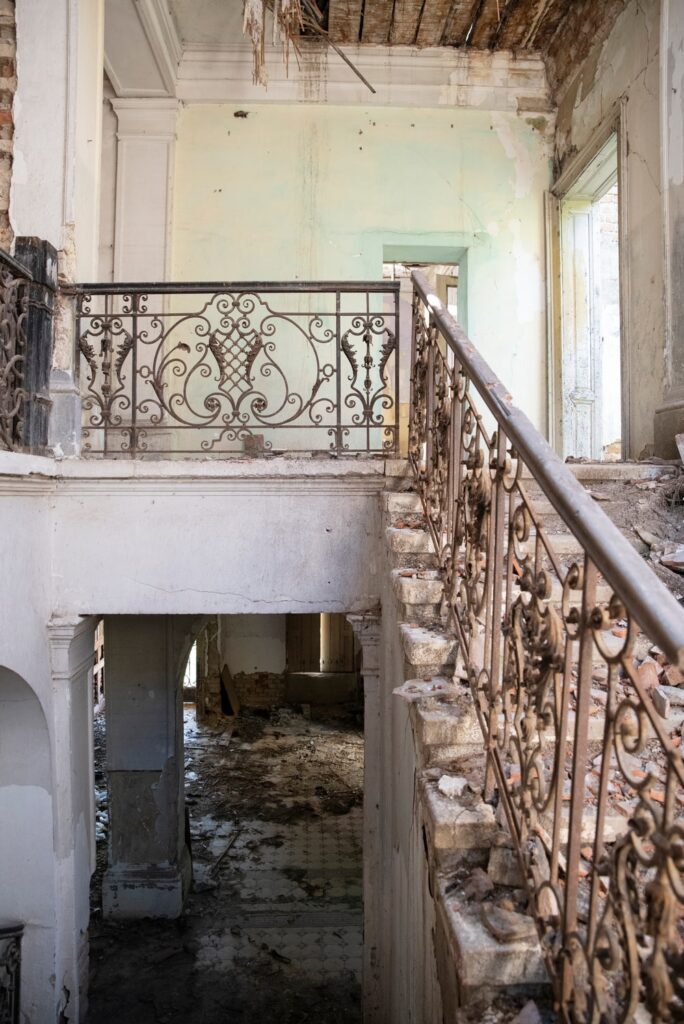 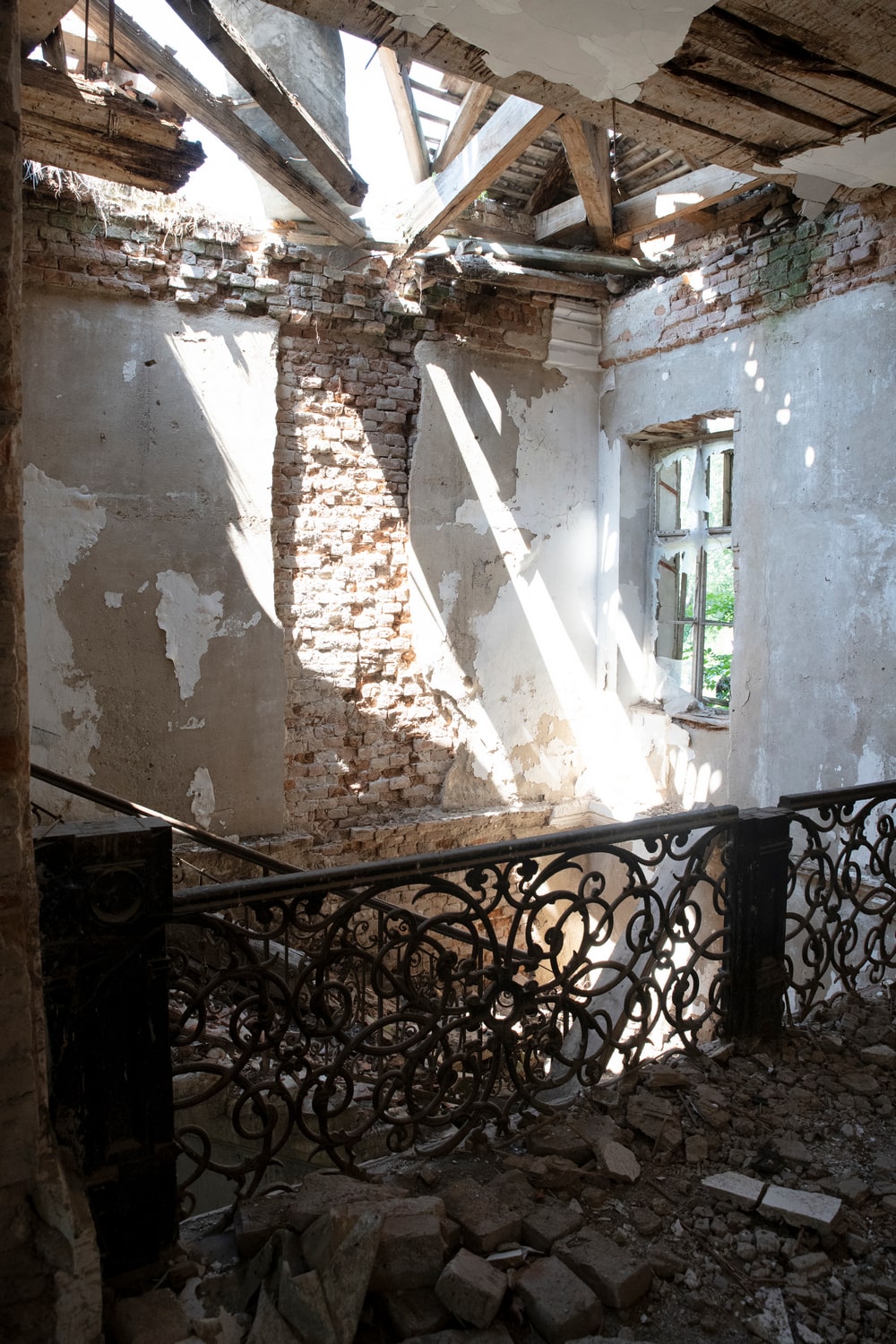 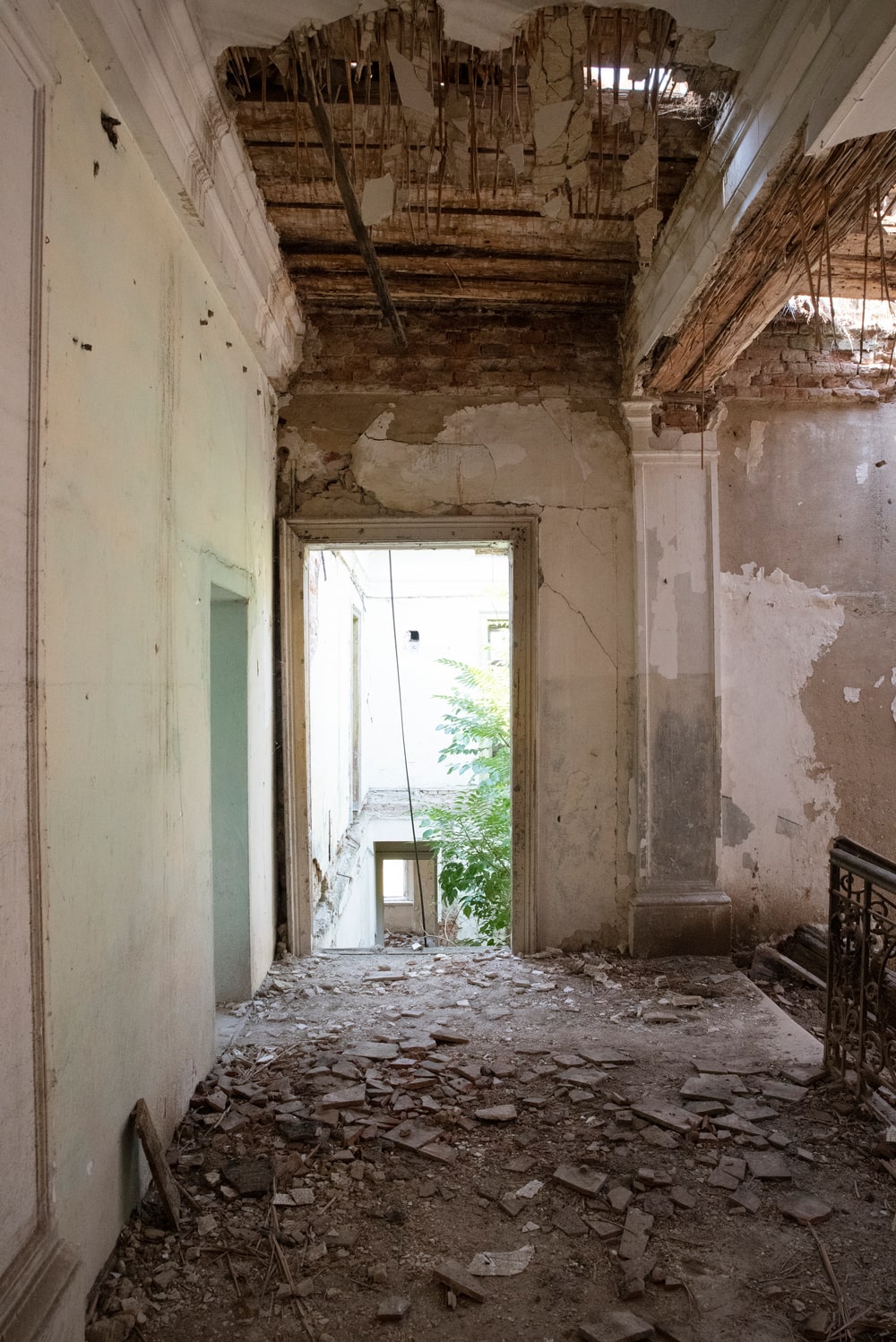 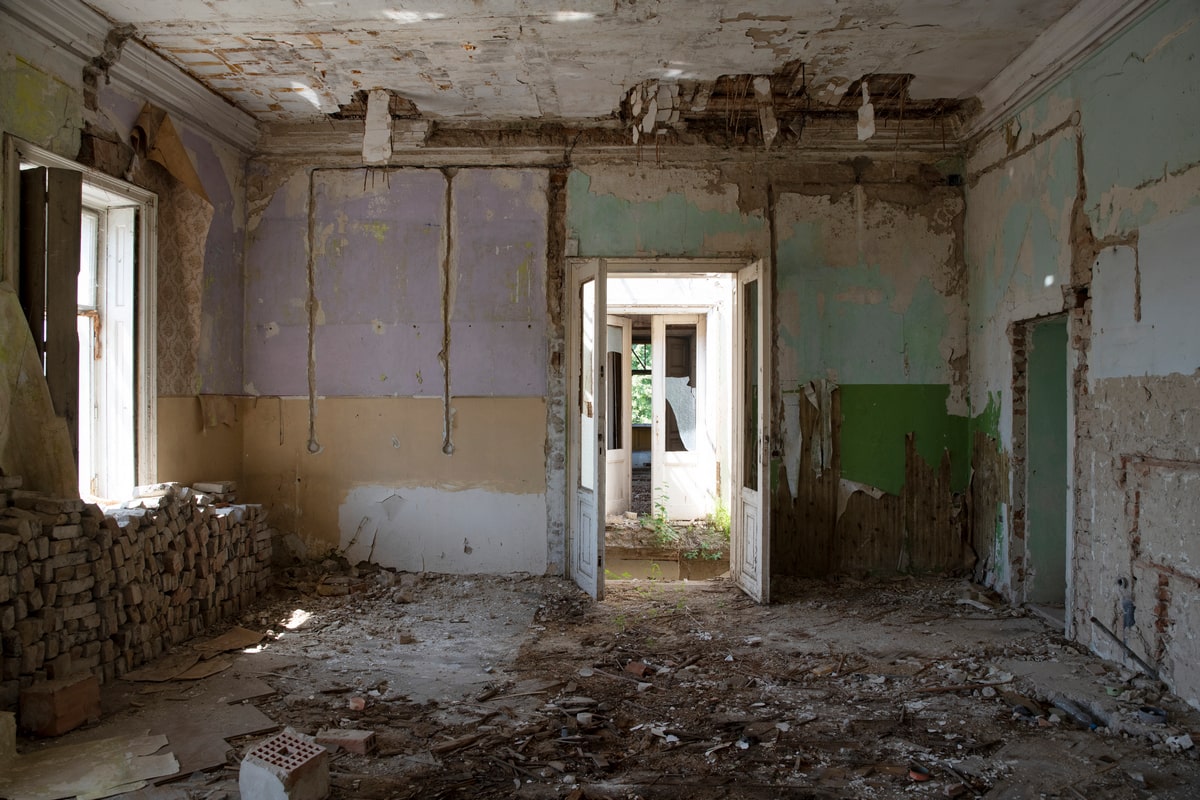 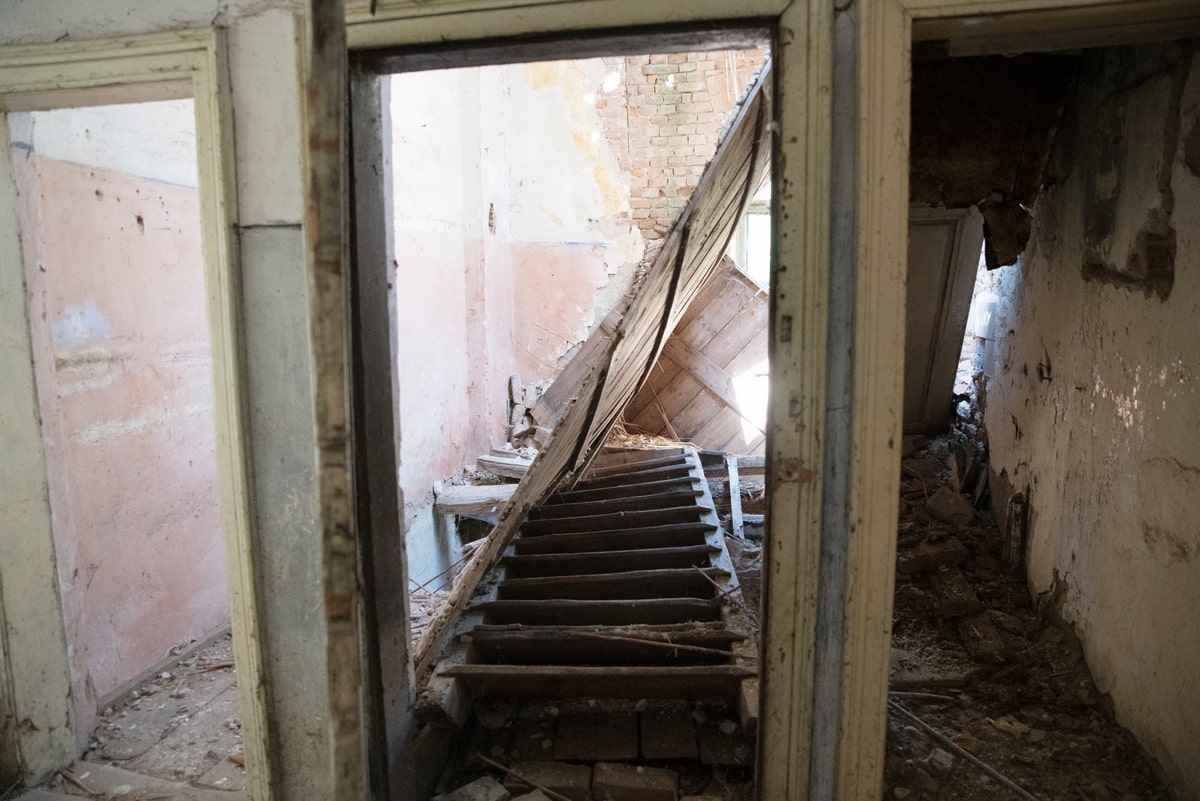 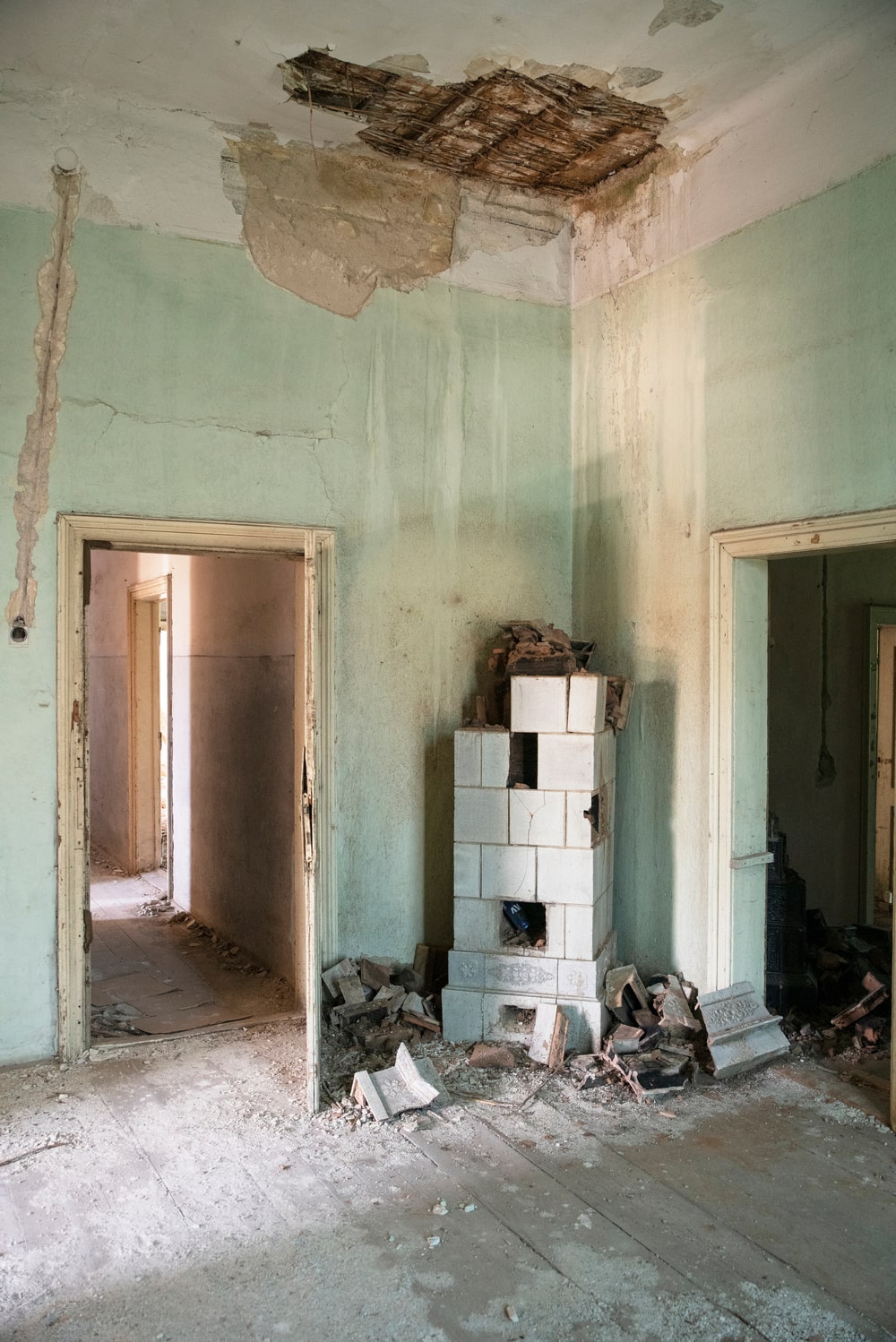 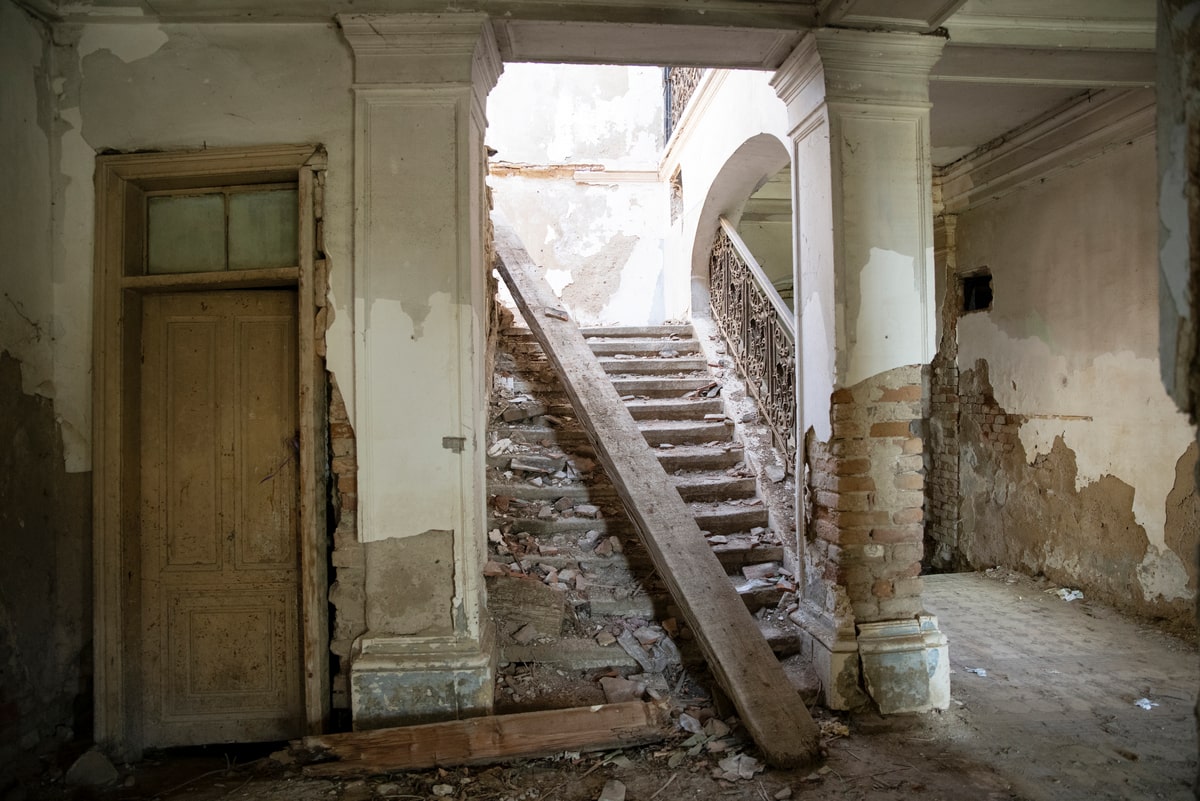 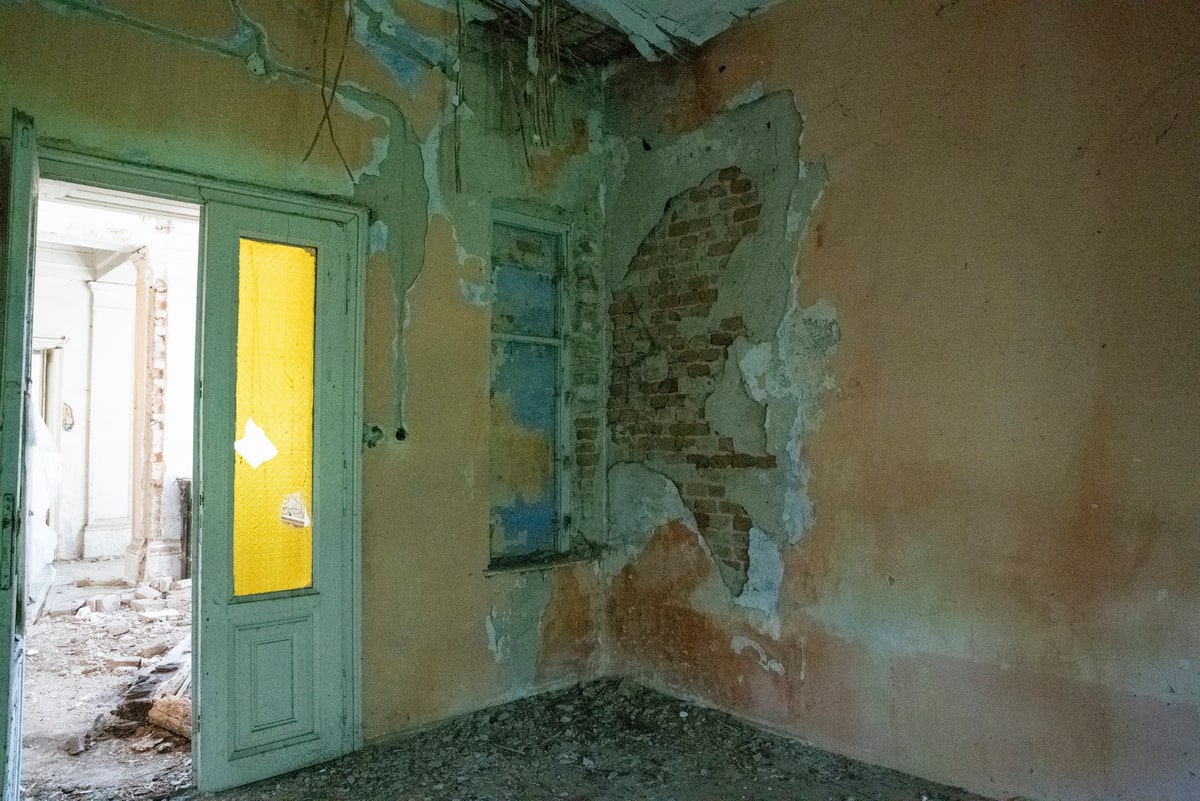 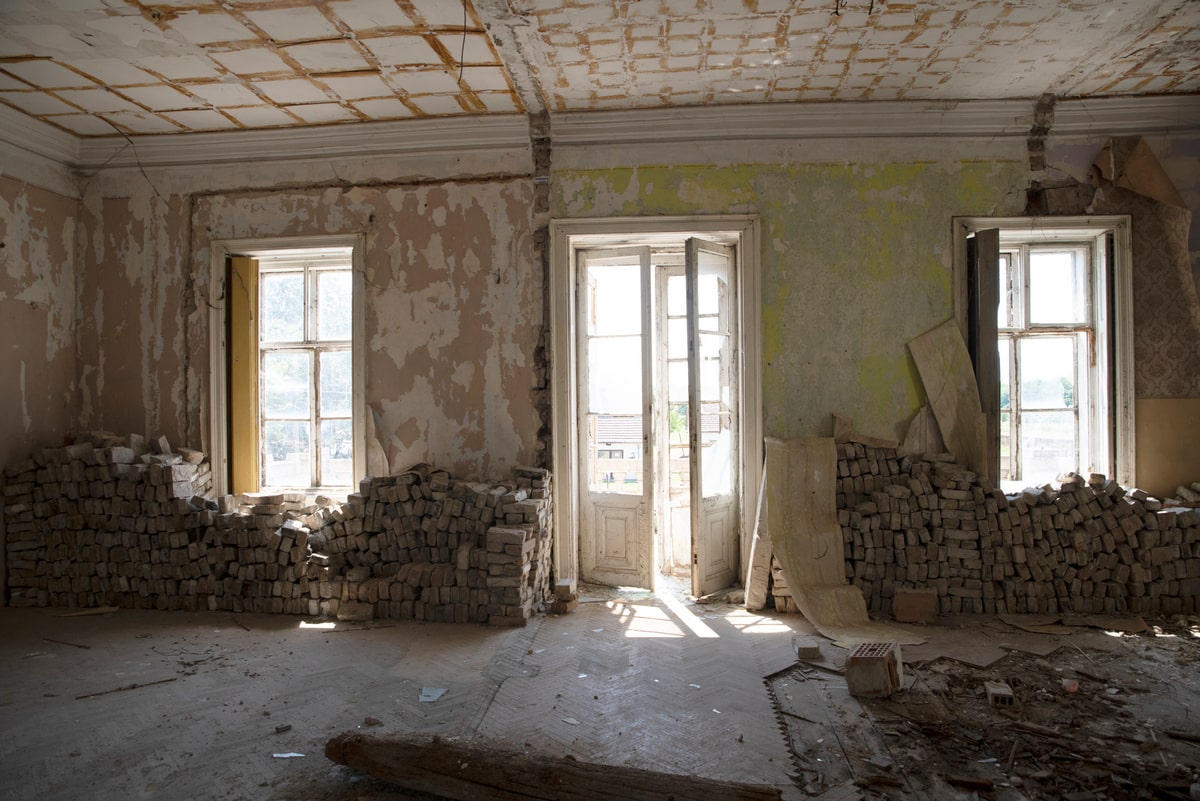 Two ruined tiled stoves inside, one white and one more luxurious, dark blue, show that the castle had luxurious equipment, since the chandeliers and fences were stolen.

Although ruined, the castle is a cultural monument of great importance. Until a couple of decades ago, there were private apartments in the castle, since after nationalization; people without apartments were moved in there. Some rare and exotic plant species are still preserved in the park. The castle is collapsing, although it is one of the most beautiful in Vojvodina. A certain Vule lives in it, who sleeps in the garbage and who was “told to guard the castle”. He took us around the castle, unlocked everything and explained how “hooligans stole everything”. The railings on the stairs have fallen, but in some rooms there is still preserved parquet and the hardwood floor. The roof began to collapse, and the huge park was mostly devastated. All the glass was broken and the woodwork was stolen for the most part. The right part of the castle, seen from the yard, is in a worse condition than the left and it is more difficult to walk through.

Extensive reconstruction is needed, since it is one of the most beautiful structures in Serbia, which can be financially self-sustaining. About ten years ago, certain Italians were interested in building a high-class hotel, so the Bissingens were ready to give it up in order to stop the decline. The Italians gave up when they learned that the planned highway would not pass by the castle. The Bissingens still hope for material restitution.

It is officially forbidden to enter the castle, but in practice it is not so strict. 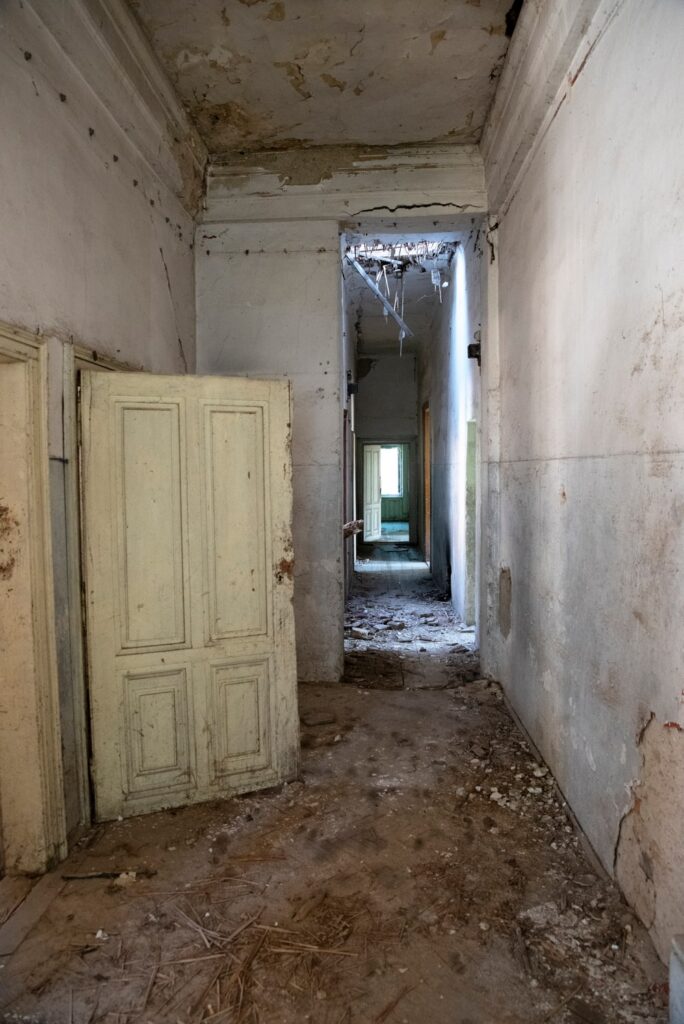 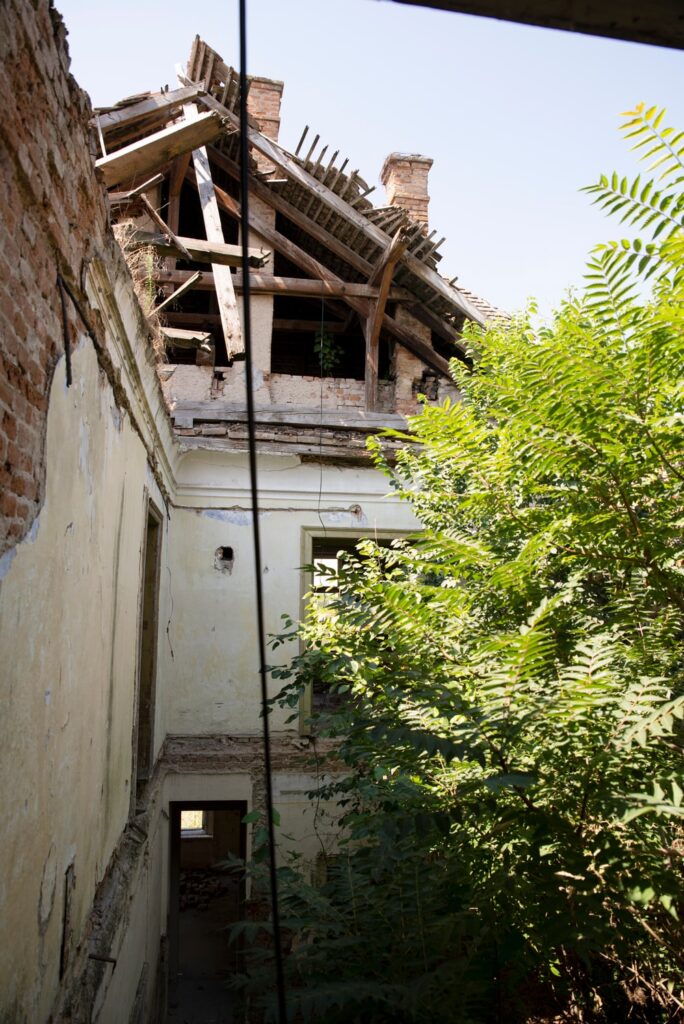 After revision of the situation, in September 2022, it was moved to the second phase. This is the phase of research work on castles that have entered the circle of those that will be reconstructed and revalued, after which technical documentation and plans for work on them will be created, which will eventually lead to restoration works. The Ministry of Culture and Information decided to help the devastated castles, since 2.8 million dinars were invested to help future investors, who are not yet on the horizon but are expected, to revitalise them as soon as possible. At the moment, the situation is heating up at two castles in the municipality of Vršac, which are truly monumental – these are Bissingen Castle in Vlajkovac and the Small Lazarević Castle in Veliko Središte. During the current works, their static stability is assessed, every crack is processed, and all ornaments are recorded, through the Institute for the Protection of Cultural Monuments in Pančevo, which is responsible for South Banat. Based on the technical recording of the condition, which came after the first recording of the condition, there will be full documentation of what needs to be repaired, in what form it should be restored, and which techniques and materials the restorers may use.