The first episcopal palace in Novi Sad was built by Bishop Visarion Pavlović in 1741 in the immediate vicinity of the newly built Cathedral Church. The main façade was facing a swampy backwater of the Danube, in the direction of today’s Outdoor Fish Market (Riblja pijaca). The chronicler of the town, Mihajlo Polit-Desančić, wrote later, at the end of the 19th century, about the great “stench and croaking” of numerous frogs and the lack of clean air and sun, as about the great problem of the bishops of Bačka, gentlemen. The impression is that precisely because of the mentioned problems, there was no major regret when the palace was destroyed in the Hungarian bombing from Petrovaradin in June 1849, when most of Novi Sad suffered destruction as well. His description from the time when Jovan Jovanović was enthroned on the bishop’s throne at the end of the 18th century has been preserved. According to that description, Aksentije Marković made sketches for the masonry iconostasis and wall paintings in 1803. In the old Palace were portraits of Peter the Great, Russian Empress Elizabeth, Maria Theresa, Joseph II, Charles IV, Eugene of Savoy, Count Georgij Brankovic and Bishop Visarion, vedute of Constantinople and Prague, framed maps, and framed panoramasof the Patriarchate of Peć and Hilandar. 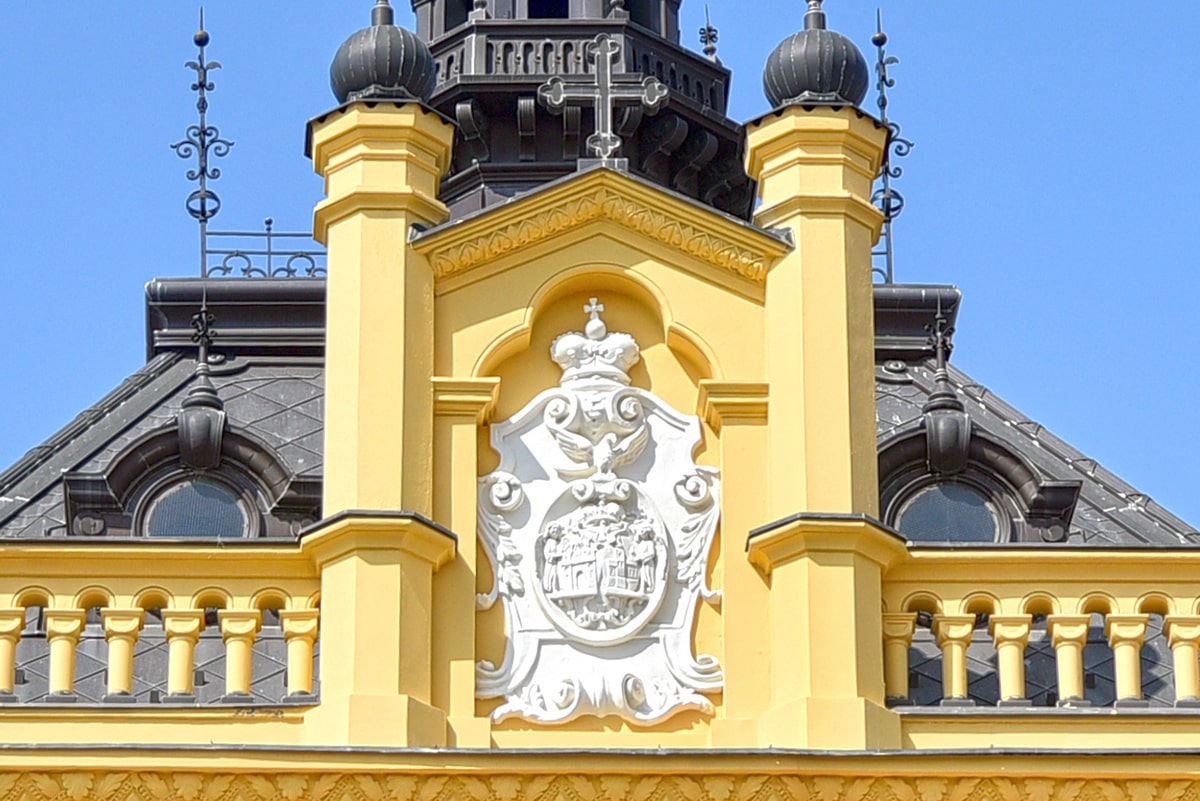 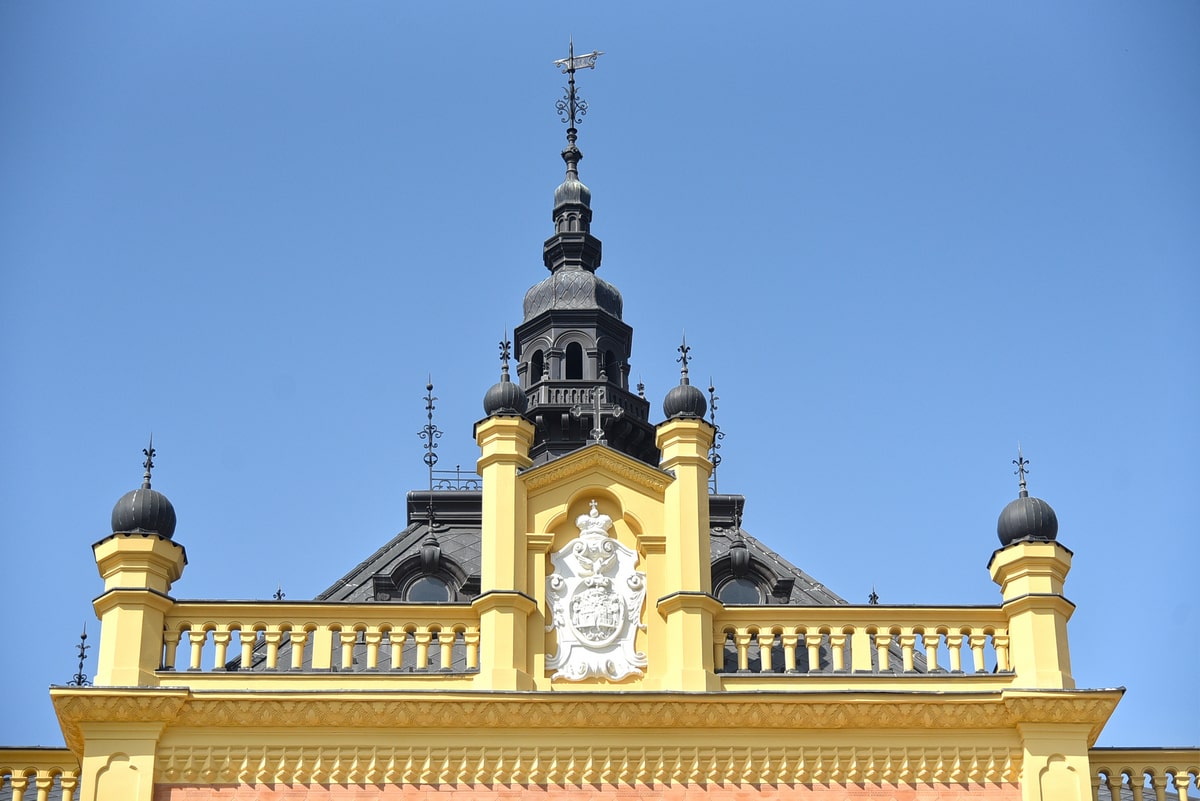 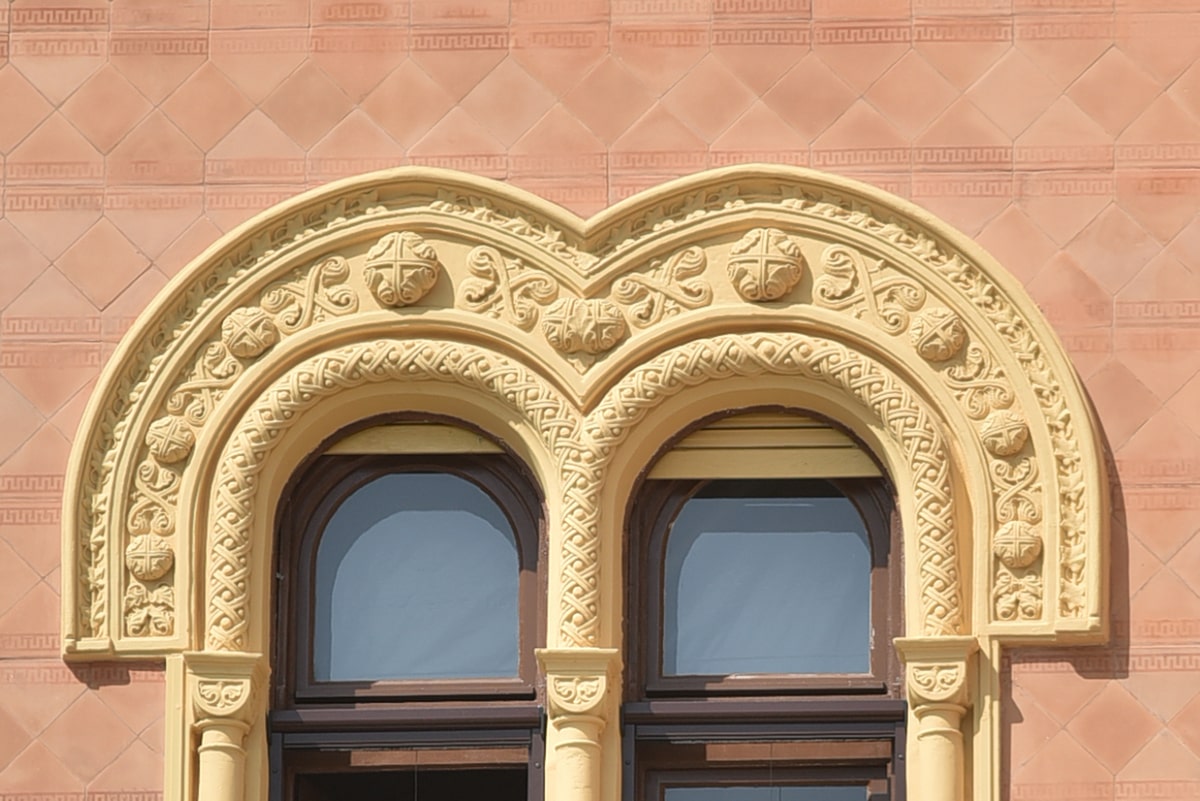 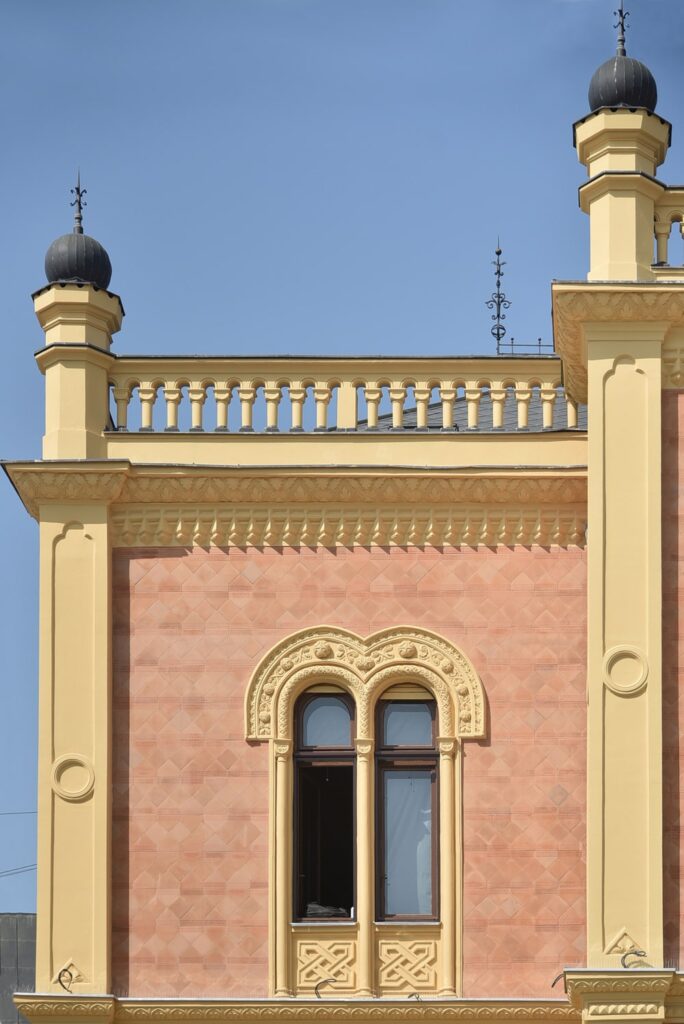 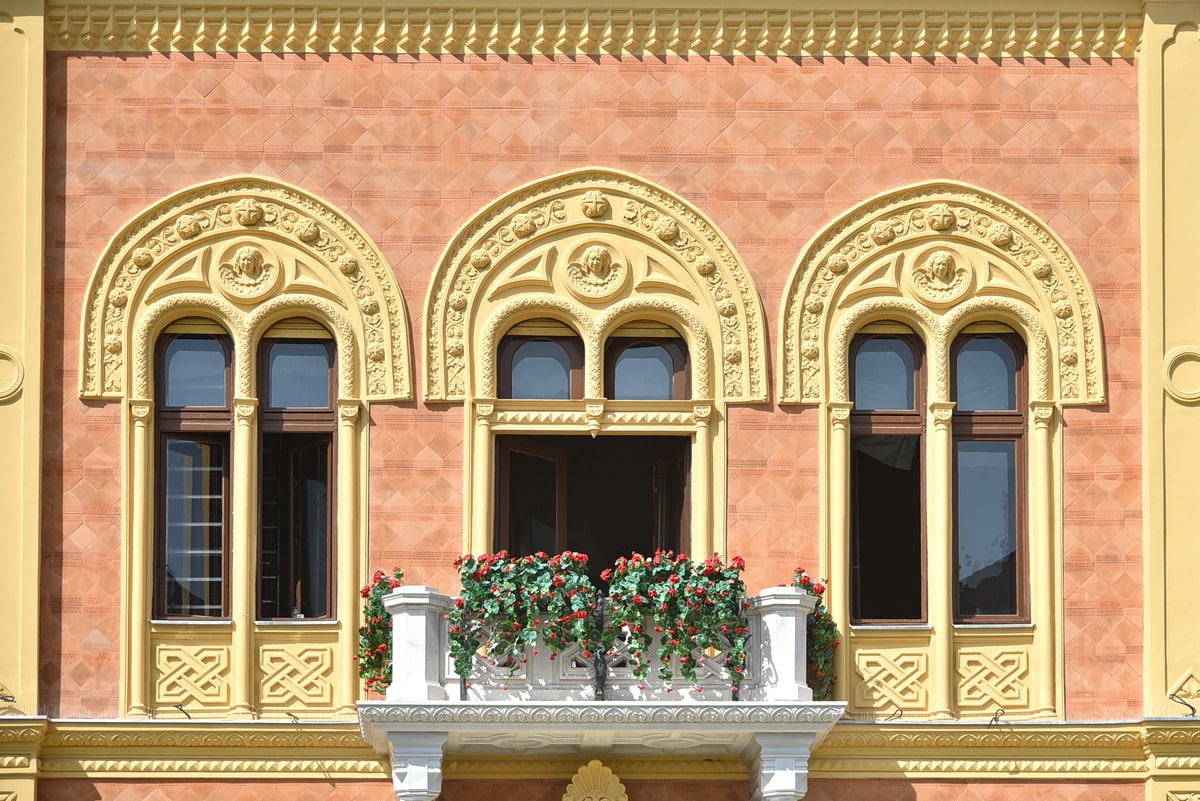 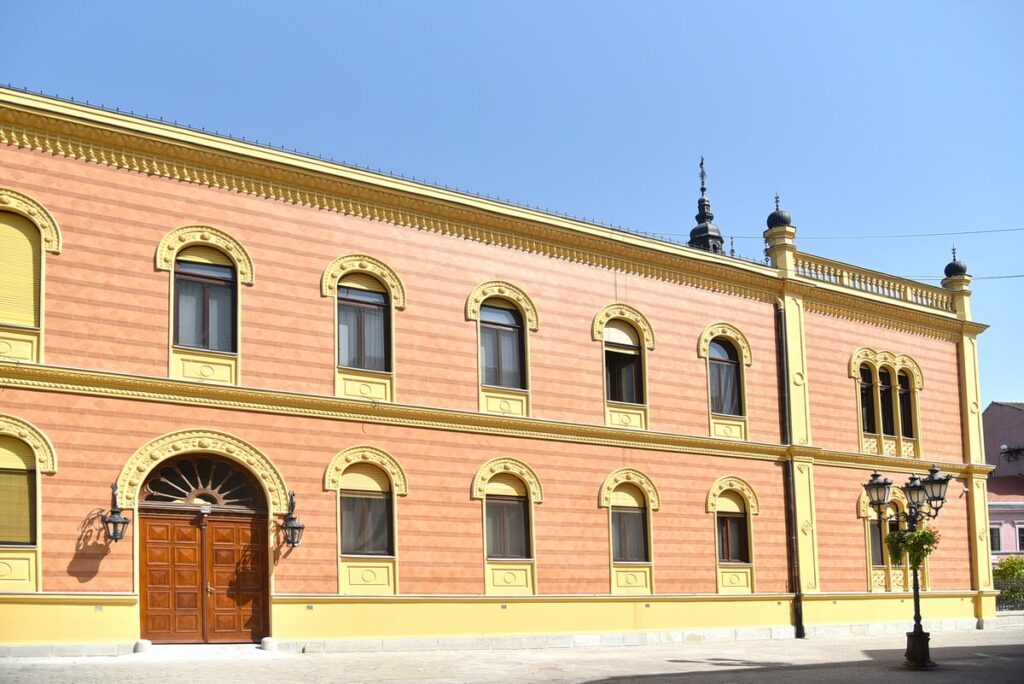 The question of building a new palace was raised immediately in 1849, but the court was long overdue. The project was made by the famous architect Vladimir Nikolić in 1899, but he did not sign it, which was done by Ferencz Reichl, the same one who was known for the palace in Subotica. This was done because of the scandal around the fact that Patriarch Georgije Branković allegedly promoted his godson Nikolić. In order for the mess to settle, Nikolić gave his design to Reichl. He commented on it very simply: “I made a design, Reichl signed it, and the palace is being built and let it be peace in Bačka ”. The palace turned out to be Nikolić’s masterpiece. Reichl oversaw the construction.

Its unusual look arose as a consequence of the influence of the rules that were established in the Viennese club of Professor Teophil Hansen, of which Nikolić was a member. Thus, in addition to the symbiosis of Byzantine and oriental architectural and decorative elements, the facade also incorporated elements of Serbian medieval monasteries (bifora and trifora). The facade is dry lined with fine ornamentation in the form of a honeycomb. Parapet slabs under the windows and decorations above the windows bear the ornaments of Serbian medieval monasteries, so it is considered that the Palace was built in the “pseudo-national style”. The use of a mixture of styles, from the medieval Byzantine, to the Italian Renaissance and Romanesque, was in the spirit of “modern Hanseatic”. Wrought iron lamps are especially impressive. On the facade is the coat of arms of the Diocese of Bačka. The cartouche with the coat of arms was transferred from the old Castle, where it was miraculously saved, and it was made by the Novi Sad carver Aksentije Marković, in 1803.

The great residence of the Bishop of Bačka was completed in 1901, during which Bishop MitrofanŠević organized a special ceremony. As guests, in addition to many respected personalities, were the Serbian Patriarch, His Beatitude Mr. Georgije Brankovic, then Pavle Peter as a representative of the Austro-Hungarian authorities and Ilarion Ruvarac, a great Serbian writer, clergyman and historian. 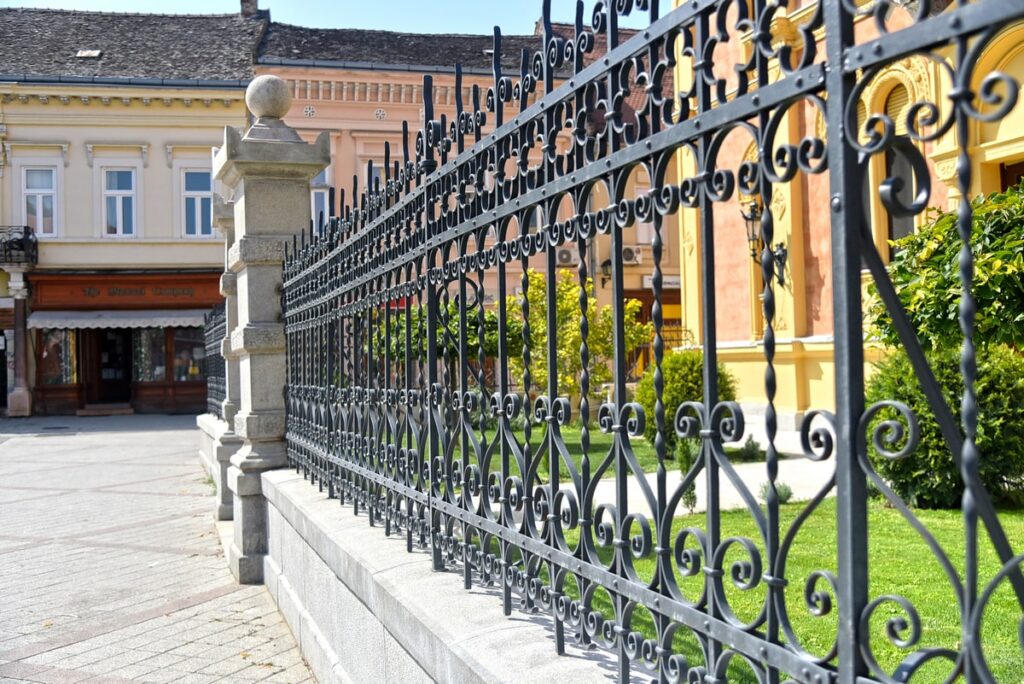 Today, the facade of the Bishop’s Palace attracts the eyes of passers-by. The bifora windows are reminiscent of the famous Studenica ones, and the romantic spirit of the facade completes the ambience of the old town core. Today, this building houses the seat of the Bishop of Bačka, Mr. Irinej Bulović, one of the most educated priests of the Serbian Orthodox Church and a professor at the Faculty of Theology in Belgrade.

In front of the palace, on the site of a former pink marble cross (moved to the port of the Cathedral Church), there is a monument to Jovan Jovanović Zmaj erected in 1984. The poet is presented in life size at the moment of his walk, which he did every day during his life in the same alley. 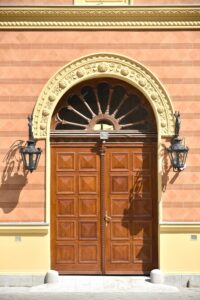 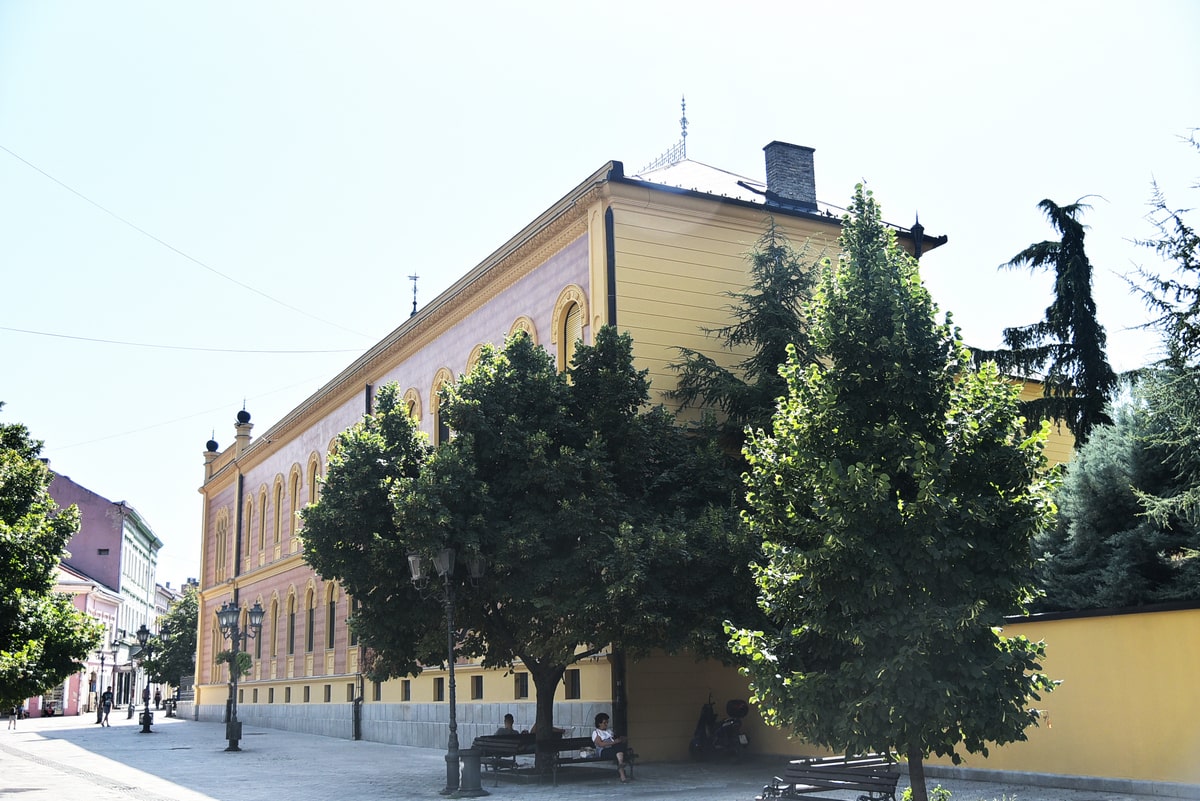 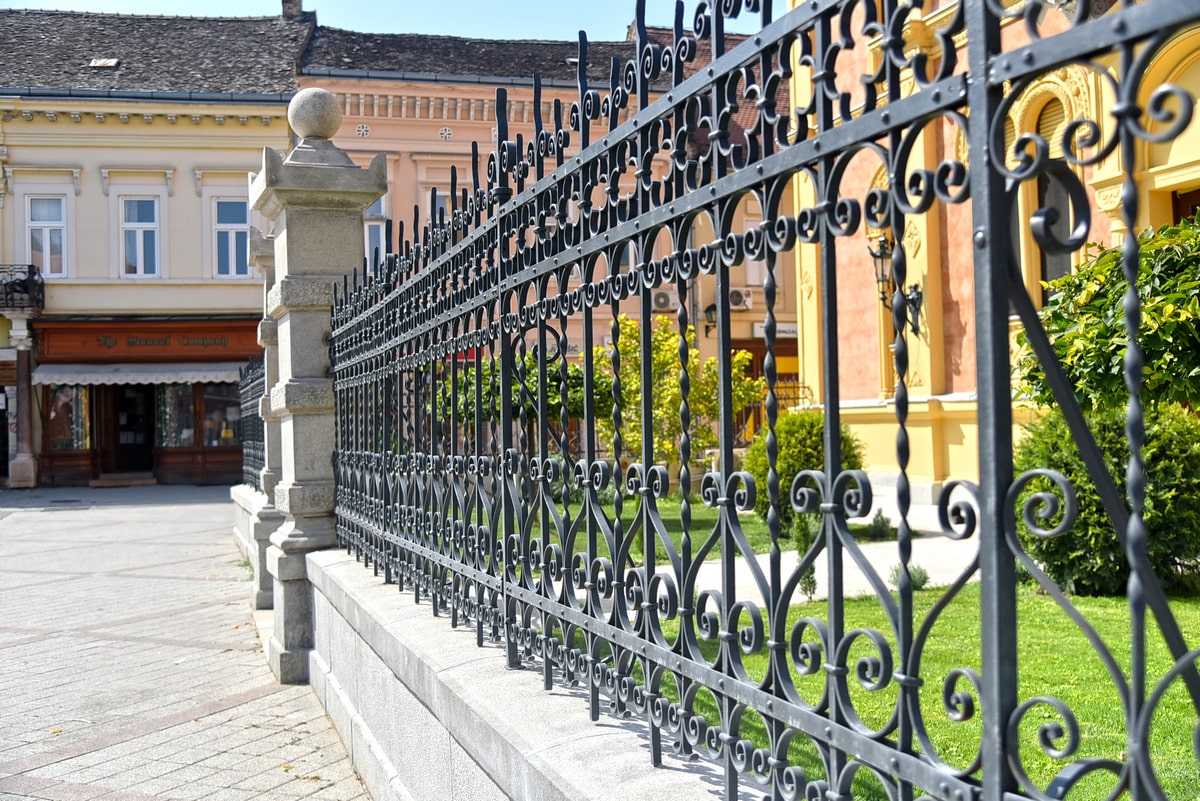 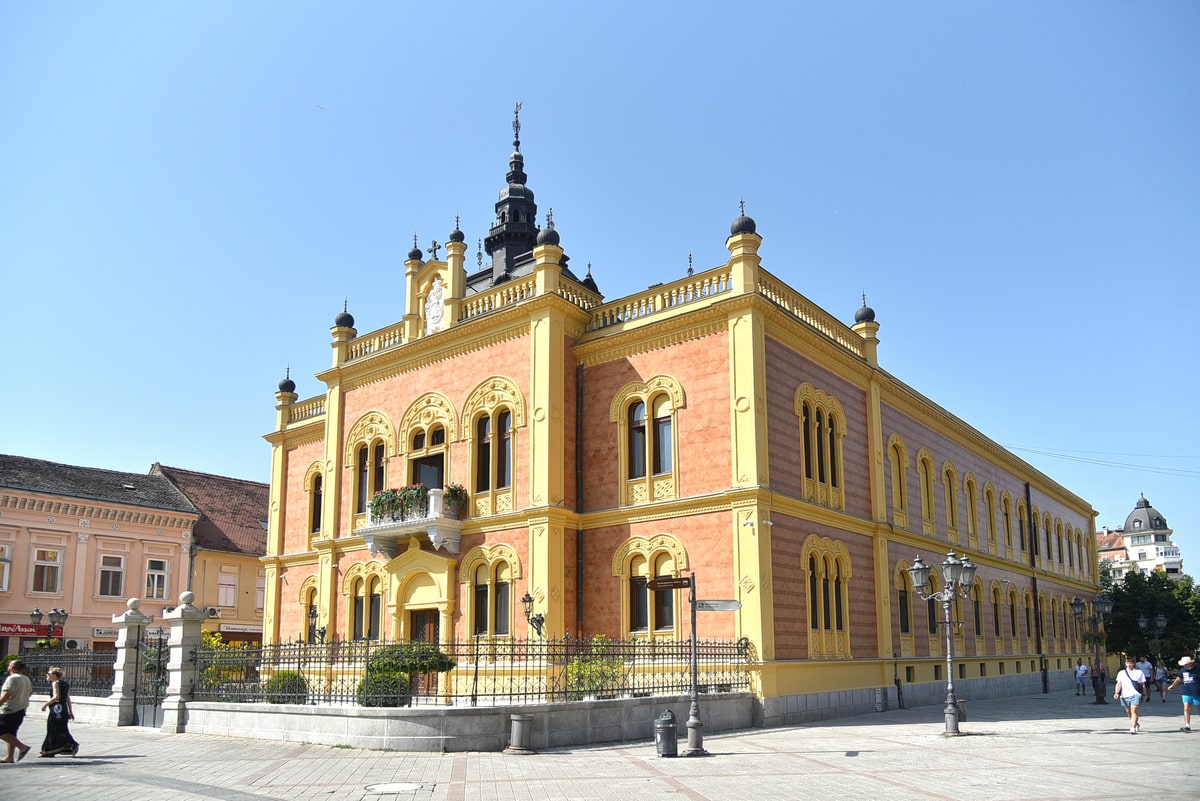 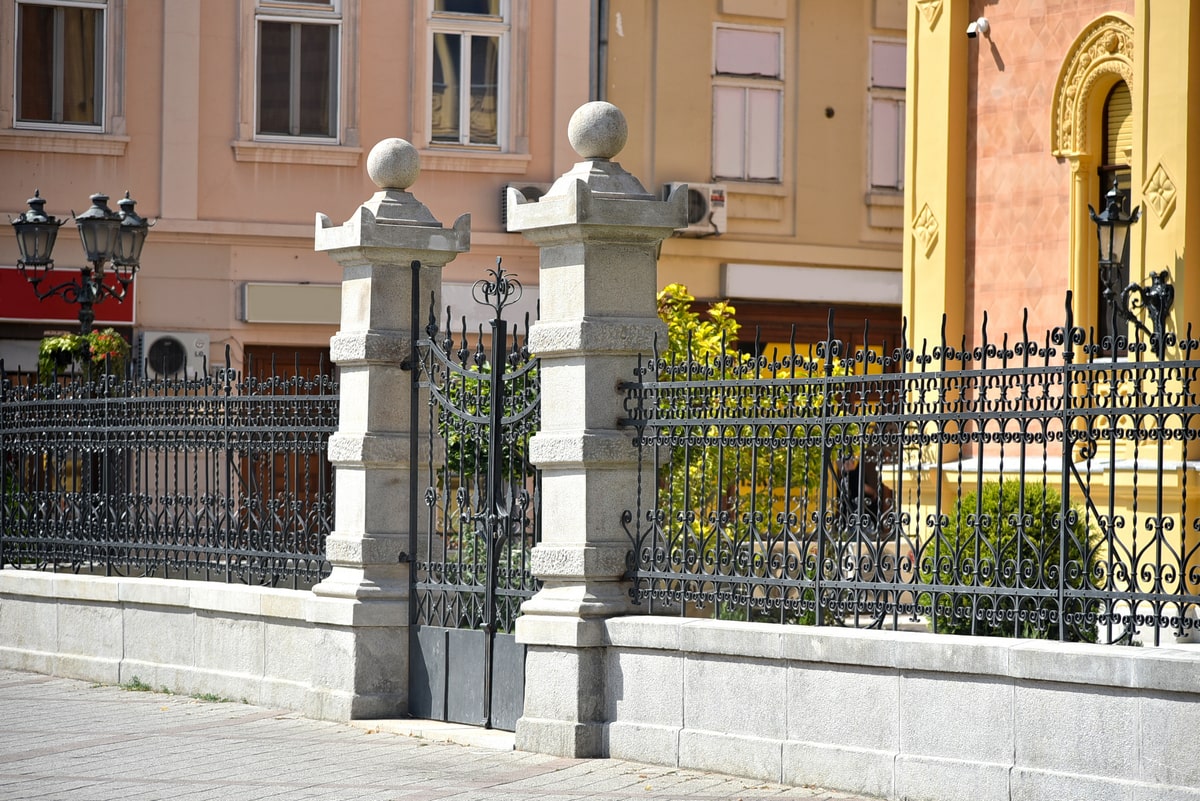 There is also a palatial chapel in the courtyard, which was used for worship by Russian emigration until the Second World War. The iconostasis in the palatial chapel was painted by painter A. Avenev. The walls of the large dining room on the first floor were painted by Vladimir Predojević, with scenes from the New Testament. The Orthodox Cathedral of St. George was built in 1903. The palace was renovated in 2007 and is in perfect condition, and the later reconstruction, which attracted attention due to the controversial replacement of the original tiles with thinner ones, was carried out in 2020.

The Palace is a registered cultural asset. Entrance to the Palace is not allowed without prior notice to the ecclesiastical authorities. 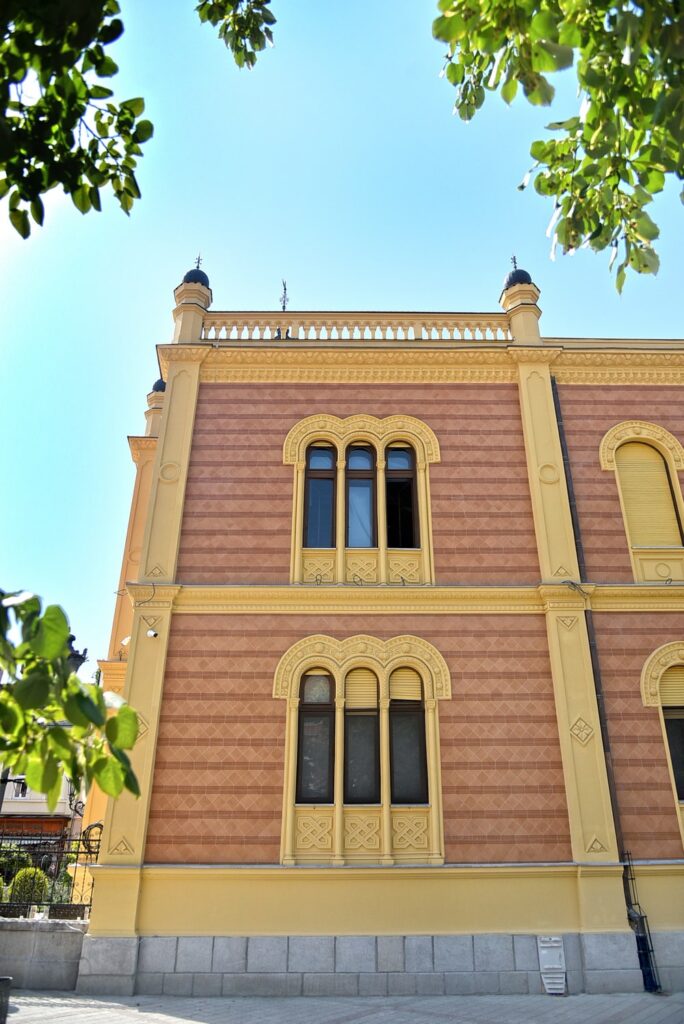 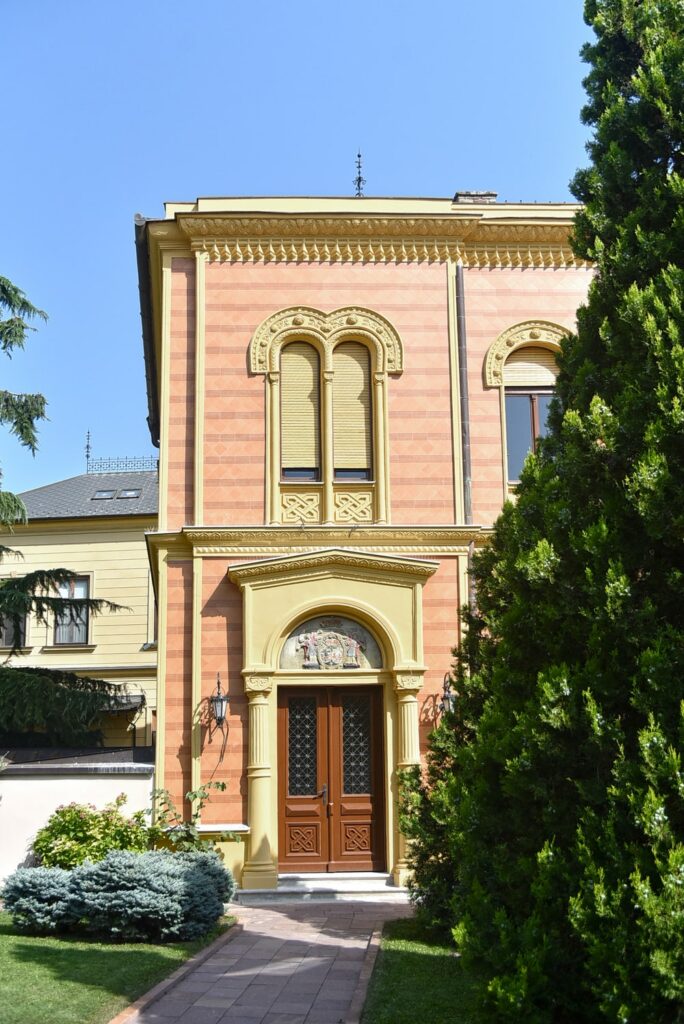