The building of the radio station in Niš is also known as the Popić House, since it is located in the former house of the famous Niš merchant Jovan Popić, and is located at 7 Lole Ribara Street (formerly Gospodska Street). Popić, as a quilt merchant, together with his brother Đorđe, had several shops in Niš. Felix Kanitz mentions, around 1890, the Popić brothers in Niš as already specialized merchants, who sell their manufactured goods only wholesale.

After accumulating wealth, Popić decided to “show” himself by a representative house, and the Popić House was built in 1900. We conclude the original appearance from the deed from November 28, 1900, which states that the house had “14 compartments with a bathroom and three compartments in the basement, as well as a large cellar”. Deed says “from the east facing the street (30.45 m); from the west to the house plot of Mr. Đoko Jovanović, doctor from Belgrade (27.40 m); from the north to the house plot of Mr. Đorđe M. Popić, merch. here. (37.30 m), and from the south to the house plot of Mrs. Persida, wife of Kosta Marković, here (31.80 m) ». Unfortunately, the name of the architect of this exceptional building has not been recorded. The only thing we know for sure is that this house was built by Italian masters, left behind in Niš from the time of the construction of the Belgrade-Niš railway in 1884.

Popić’s house was very famous across Serbia, and especially in the city of Niš, which gained in importance by the railway. Many receptions of the owner took place in it, who expressed himself and was proud of his great hospitality. Some of the stories say that in 1903, the Minister of Foreign Affairs of imperial Russia, Count Lamsdorf, was in Serbia and was hosted, together with the Serbian Minister Vaso Antonijević, in Popić’s house, where he spent the night. Returning to Russia, Count Lamsdorf also informed Tsar Nicholas II about Popić’s hospitality. The emperor then sent Popić, as a sign of gratitude, his and the queen’s painting, a silver goblet and a large bowl with a spoon, decorated with precious stones, handmade in the “Russian style”.

During the First World War, when Niš was the war capital of Serbia, in the house of Popić, from October 24, 1914 to October 20, 1915, the King of Serbia Petar Karađorđević was accommodated. At that time, this building, for a whole year, was the gathering point of both the political and cultural life of Serbia. After the end of the Second World War, during 1944-1945, the Institute for making bandages and the wounded was first located here, and then the building was permanently nationalized, and since 1946 it has housed a military, cultural and educational group, but not for long. Between 1947 and 1950, the boarding school for neglected/uncared children, the House of Students in Economics and the District Police Station were located. Finally, since 1950, the Radio Station Niš has been located here, which is still in this building, as part of the Radio Television of Serbia. In 1959-1960. the second floor was added in the same style for the needs of the Radio Station, according to the design of the Niš architect Bora Spasić, which is a commendable effort to protect the architectural heritage of Niš. 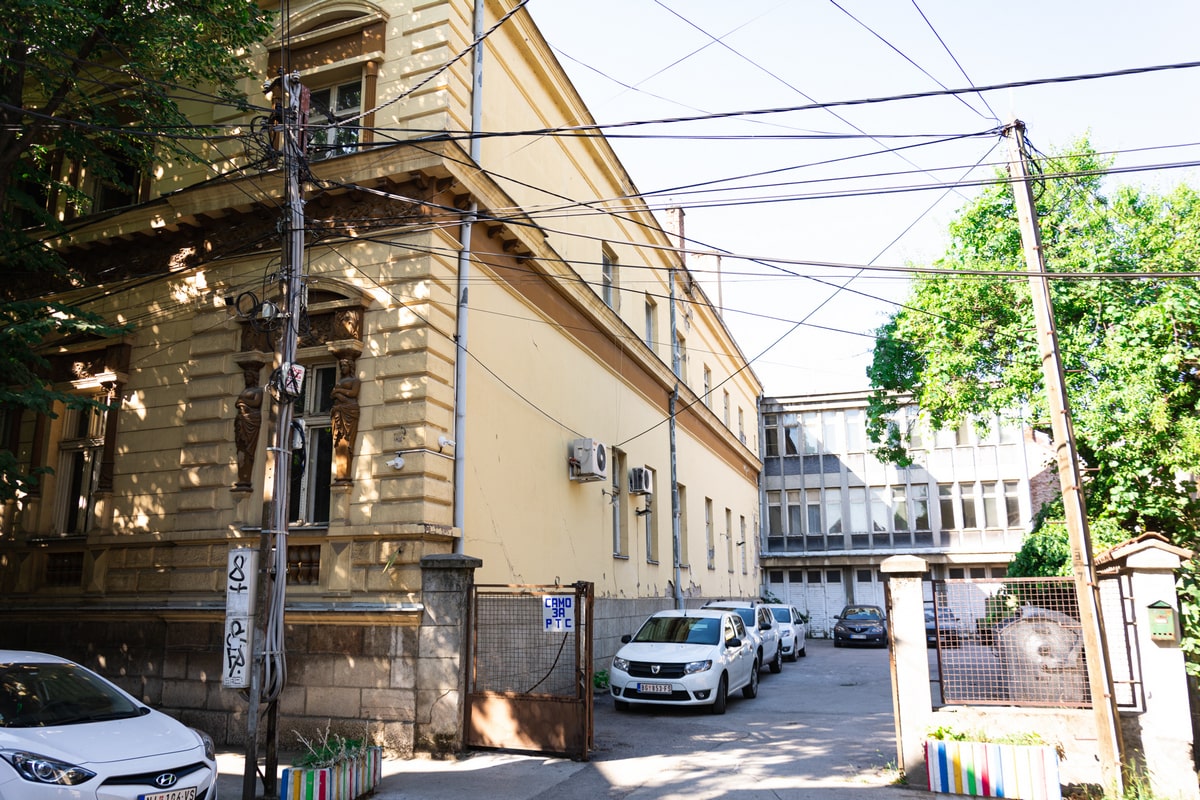 Popić house was built in the Neo-Renaissance style, with a richly ornamented facade in a deep granite relief. It is a sign of the cultural progress of the young Niš bourgeoisie at the beginning of the 20th century, and at the same time the desire to equalize with developed environments and “writing a new page in the life of Serbia, as a European country, and move away from oriental and Balkan patterns in architecture” – at least was the goal of the then Serbia. As a valuable architectural and historical building, the Popić building was placed under the protection of the law in 1983.

The façade is damaged in several places. The side of the building towards the yard is in a very bad condition. It is property of the Popić family from Niš, who are fighting in court for the restitution of the building. The current user of the facility is still, until a different decision is made, RTS. According to the doorkeeper, RTS wants to renovate in part or the entire facade. Only employees and Radio visitors are allowed to enter the building.