Maldegem Castle (sometimes Maldeghem, Flemish pronunciation: “Maldehem”) today The building of the cultural center Novi Kneževac, was built in 1910 for the count’s family Maldeghem, after which the building was named. The National Library “Branislav Nušić” from Novi Kneževac has been located in the Maldegem Castle for several decades, and it has become the focal point of important cultural events in the city. It is located in a monumental park, a protected monument of landscape architecture, in which there are as many as four castles: this one, the Servijski-Schulpe Castle and two castles of the Talijan family, which are in ruins.

The noble family Maldeghem originates from Belgium, more precisely from a city in western Flanders, which bears the same name as the family, Maldegem (Maldegem is a new way of spelling the name of the city, previously it was spelled Maldeghem). The connection with Austria is that Flanders was also a part of the Habsburg possessions, that isff the Spanish Netherlands. It was then that the Maldegem family experienced its greatest rise, during the 16th and 17th centuries. They decide to move to the “promising East” a couple of centuries later: Count Arthur Maldeghem was the first to arrive in the then Turkish Kanjiža, who was an officer and doctor of law, but did not stay there. The genealogy says the following: “Arthur married Georgina Bauer, daughter of Otto Bauer and Albertina, born Schulpe from Turskish Kanjiža. Arthur Maldeghem’s father was a knight of the Order of Malta, Carlo Maldegem, from Münster, and a participant in the Napoleonic Wars. As Napoleon’s page, he had to bring the news of the defeat at Waterloo to the Parisians on June 18, 1815. Count Arthur Maldegem was born in 1835 in Niederstotzingen, Germany. After marrying Georgina Bauer, he lived in Pozsony, today’s Bratislava. In Pozsony, in 1869, their only son, Arthur the Younger, was born, who later married a girl from the Bethlen family, Wilma, who bore him four children. Arthur Jr. died at the age of 34, leaving behind his wife Wilma with four children and parents.”Quite a complex and impressive genealogy.

After her son’s death, motherGeorgina decided to return to northern Banat, and to build a summerhouse there so that she could be with her relatives more often. Georgina inherited 1,880 acres of land in Turkish Kanjiža from her mother Albertina Schulpe. She started building the castle in 1904, but unfortunately did not live till completionof the construction in 1910: she died in 1907. After the death of her mother-in-law Georgina, Wilma Maldegem with her four children, Maria (1896), twins Carlo and Georgina (1897) and Albertina (1901), came to Turkish Kanjiža to oversee the completion of the construction of the castle. In Turkish Kanjiža, she found help from relatives, so she left the custody of the children to Emil and Bela Talijan, who also helped her with the completion of the castle.

Out of four children, only two remained to live in Novi Kneževac. Albertina called Berta, who would later marry a distant cousin of her guardians, Tibor Talijan, and Carlo, who returned to his estate after finishing school in Pozsony. Count Carlo Maldegem received his doctorate in political science, but he had no major ambitions. He was not married, he was not involved in politics, he was good-natured and close to all people, he enjoyed hunting, reading and socializing. He was not particularly interested in the property, and he had the production of vegetables, cereals, cattle, pigs, horses and carp in the fishpond. The product that the Maldeghems were proud of was red pepper, for which Novi Kneževac is still known today (today there is a factory “Aleva” as a continuator of this tradition).

After the First World War, his property was reduced to 713 acres, with which the Count has lived until the Second World War without any difficulties. Count Maldegem was a strong anti-fascist and helped Serbs and Hungarians survive the war “hungry years”. Although it was well known whose side he was on, at the end of World War II he was captured and put on the death penalty list, but some locals managed to free him and save him from being shot. Albertina died on October 7, 1944, on the scaffolding behind the Talijan castle. The castle was looted, and 7,000 books of the Maldegem family library endedin a bonfire near the castle. Valuable furniture, valuables, porcelain, works of art were taken away, among which were two of Rubens’ paintings. All this was mostly done by the same people whom the count helped during the war when they had nothing to eat. After his release, the count did all sorts of jobs in order to survive. He carried water, chopped wood, was a fireman, took various manual labour jobs, only to get a crust of bread in return. In 1961, Count Carlo Maldegem decided to leave the country and go to Germany at his relatives. He returned before his death after eight years to see his beloved Banat once again, and he died in 1970 in Mainhofen, Germany, and was buried in the family chapel in Niederstotzingen.

Before the library was housed in the Maldegems’ castle, there was a hospital there for a while after the Second World War, then a boarding school, a police administration and a bank. On the wall near the side entrance, there is still a built-in marble slab with a relief depiction of the patron saint of all hunters, St. Hubert and the deer, which the mother of Count Carlo Maldegem, Wilma Bethlen, brought from Transilvania from the estate of her noble family. 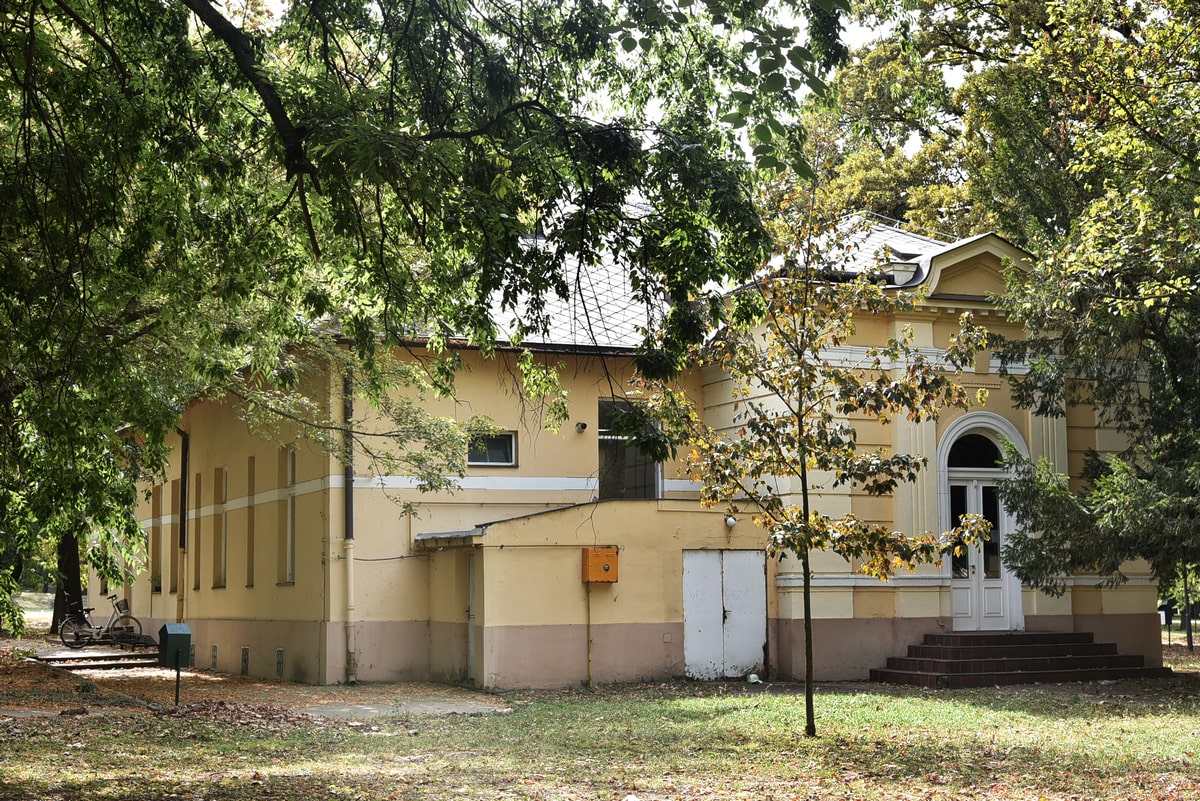 Count Maldeghem’s castle was built as a freestanding, single storey building, surrounded by a well-kept park in which rare trees have been preserved to this day, and a round neglected fountain is in front of it. The basic concept is determined by the idea of ​​a “Polish castle” as they were built in the last decade of the 19th and the beginning of the 20th century in an eclectic style, which all depended on the imagination of the client and the architect. It has a rectangular floor plan, and has an approximately symmetrical layout of the space, except for minor deviations in the internal organization. It is longitudinally oriented with the attic elevation in the central part of the roof.

Architectural experts say the following: “The main entrance is located on the longitudinal side in a central, shallow avant-corps which, according to an old postcard, used to end in the roof zone with a balustrade at the corners marked by acroteria, and a centrally wavy, baroque tympanum with a vase on the top. At the same level, an irregular triangular attic, marked with two side pillars, ends with two shallow avant-corpses located centrally on the side wings. Horizontally, the facade is made of a cordon profiledcornice, and in the attic it flows series of denticles. The openings on the front façade are symmetrically arranged. To the side of the central entrance, which has been devastated over time, flows a series of four rhythmically placed arched windows with a “T” division of the panes. There used to be balustrades under the windows. The openings are marked with fluted pilasters that carry sezession motif in the form of an outlet with a toothed sequence, as it appears above the opening leaning on a cordon cornice. The wall canvas is madein imitation of rectangular stone blocks between the openings. In front of the main entrance there is a terrace bordered by a stone balustrade. The side facades have been designed in the same way, while the back façade has undergone changes over time and today is a simple, flat wall canvas with all the openings made evenly. The roof is complex, covered with eternity fibre cement tiles, sometimes with acroteria at the top. “

In 2015, the facade, roof and carpentry were restored. The facade has a striking yellow colour. There is only one portrait inside the castle, reminiscent of the Maldeghems era. The building is in good condition.